How cassava can trigger industrial revolution 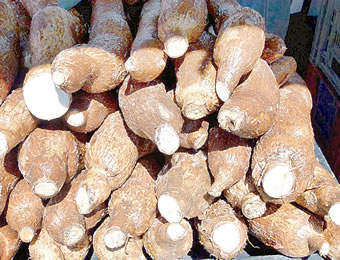 Cassava is one of the world’s most important food crops, with annual global production at about 276 million metric tons in 2013 with Nigeria accounting about 19 per cent of the gross global production.

According to the Food and Agriculture Organisation (FAO), Nigerian cassava production is by far the largest in the world; a third more than production in Brazil and almost double the production of Indonesia and Thailand. Cassava production in other African countries, the Democratic Republic of the Congo, Ghana, Madagascar, Mozambique, Tanzania and Uganda appears small in comparison to Nigeria’s substantial output

Regrettably, all these achievements disappeared as a result of crude oil exploration in Nigeria. The government diverted its attention to petroleum production, agriculture got very little attention.

Cassava is an appropriate commodity to feature in Nigeria’s economic development as the country is confronted with a rapidly growing population and rising urbanization while demands increase for food, feed for livestocks and raw materials for industries.

Nigeria’s cassava production accounts for about 20 per cent of the total global output of cassava, but less than 1 per cent of exports.

In 1989, Nigeria became the world largest producer of cassava due to the use of mechanical grater to prepare gari (a local food made from cassava).

Also, the development of the TMS varieties by national partners and the International Institute for Tropical Agriculture (IITA) helped in boosting cassava production in Nigeria.

Nearly 90 per cent of cassava production in Nigeria is for domestic food production and produced by smallholder farmers. Production yield are still extremely low and Nigeria could easily double its production.

Smallholder farmers produce cassava for consumption in form of gari, fufu and other local food which may not contribute to the nation’s foreign exchange.

It is important to know that cassava provides over 20 domestic food types for Nigerians. It is a raw material to ethanol, industrial starch, cassava flour, glucose syrup and sweetener. These products are also raw materials to numerous industrial firms with limitless domestic and export market potential.

This negligence of agriculture led to Nigeria being one of the largest food importation nation in the world. Nigeria currently spends over N1.3 trillion importing basic food in the country.

According to Alfred Dixon from the IITA, during the just concluded National Cassava Summit “Nigeria has all it takes to revolutionize the cassava subsector. It has 84 million hectares of arable land but cultivates only 40 per cent; has 263 billion cubic meters of water – with two of the largest rivers in Africa, have a cheap labor force to support agricultural intensification and above all, has a population of over 170 million which makes the country a huge market”.

Realising the importance of cassava, the government have prioritised a cassava development plan as part of its initiative to transform the agricultural sector.

The first move to improve cassava production was during the administration of former President Olusegun Obasanjo when he launched the Presidential Initiative on Cassava (PIC) in 2002.

Part of the aims of the ATA was to inject $380 billion into the economy from partial substitution of cassava flour for wheat flour in bread and confectionery.

The Cassava Transformation Agenda which was part of the ATA was also aimed to create a new generation of commercially oriented cassava farmers linked to businesses in the value chain that could drive reliable demand for cassava.

Nigeria produce 40 million MT of cassava annually, yet, Nigeria does not add value to the crop. The price farmers get for their cassava is so low that many leave their crops under the ground because the cost of harvesting the crop is far higher than the returns.

Being the largest producer of cassava in the world, yet Nigeria spends $680 million annually importing flour, starch, glucose and animal feed.

It was as a result of this that the past administration engaged in strategies to add value to cassava production in Nigeria, and make Nigeria the largest processor of cassava. The step taken was the introduction of the cassava flour for bread making.

The cassava bread initiative is the inclusion of 20 per cent cassava flour to bread baking, thereby substituting wheat flour with cassava flour.

In the past and presently, Nigeria had depended on importation of wheat flour annually to feed its population, thereby  spending about N635 billion importing wheat every year.

There is need for the present administration to review and fine tune the cassava flour initiative because if taken seriously, cassava bread production will enrich the local farmers, increase the nation’s GDP and save a lot of money for the nation.

Despite previous interventions in cassava subsector, the cassava value chain in Nigeria remains highly fragmented. The majority of production and processing is done by very small scale farmers.

Cassava production is dominated by smallholder farmers with about 90 per cent farming on 0.2-2 hectares with few inputs.

The Programme Director of Partnership Initiatives in the Niger Delta (PIND), Dara Akala while speaking at the National Cassava Summit said cassava has numerous potentials.

He said that the summit will facilitate the the process of transforming the potentials of cassava into real gain for producers and processors.

“Cassava has so many potentials, the key driver of this summit is to learn how to transform the potentials to rest gains for producers and processors.

“There are two broad market in cassava which includes food market in terms of gari and fufu and the industry market where we have the greatest potential, for example, Nigeria currently produce about 54 million tons of cassava tuber but less than 200,000 tons are processed into industrial products”, he added.

Akala also noted that industrial processors are operating at less than 20 per cent of their installed capacity because they cannot get cassava tubers to process.

There is need for the government to improve its partnership with private sector and form a strong synergy with cassava farmers so that the untapped potentials of cassava could be harnessed.

The government should also ensure that credit facilities are made available and affordable to farmers at a single digit interest rate, this will further make cassava production more attractive.

When all these are put in place, cassava production will be more of a business instead of the predominant subsistence approach.

How to prevent blindness