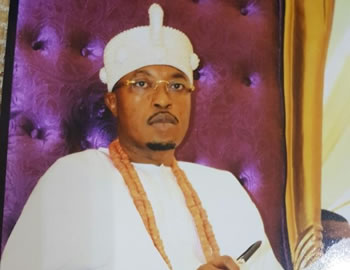 THERE was drama in the city of Iwo, in Osun State, on Saturday, when some protesters stormed the palace of Oluwo of Iwo, Oba Abdulrsaheed Adewale-Akanbi with a coffin.

Sunday Tribune gathered that the development might have been informed by the controversy over a chieftaincy title of “Aro.”

However, anti-riot policemen were swiftly deployed to the scene and the coffin was  removed  to pave the way for Oluwo, who later addressed the protesters to calm frayed nerves.

According to a credible source, “the protesters stormed Oluwo’s palace following hint that an unqualified person is being proposed to fill the vacant position of Aro of Iwo land”.

Aro is one of the powerful kingmakers in Iwo town and the protesters were said to have been enraged when they learnt that one Paje from Aro Bode area is being considered for the chieftaincy position.

But, natives of the town from Aro Olukotun,  who sources said have been traditionally nominating Aro in the past, rejected the alleged choice of Paje, contending that he is not from their compound.

As of the time of filing  this report, normalcy had been restored in the town after the Oluwo held closed door meeting with the protesters inside his palace.

Speaking on the protest on phone, Oba Adewale-Akanbi informed newsmen that the protesters were from the family of the immediate past Aro of Iwo, explaining that the move was aimed at intimidating him.

While confirming that a coffin  was brought to the palace by the demonstrators, the traditional ruler maintained  that “there was no way another Aro could emerge from the same family that produced the last one that reigned”, just as he assured residents not to panic over the development.

We must trust God at all times —Pastor Omole

Why we came to Nigeria to snatch vehicles —Beninois suspects

Police rescue 19 children, others from human traffickers in Edo