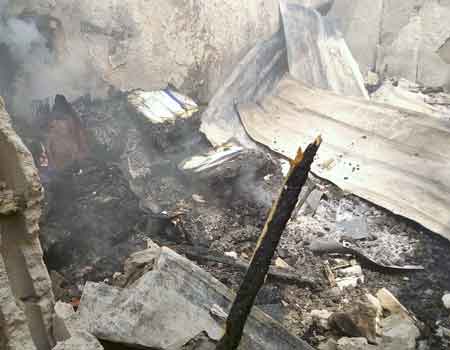 Governor  Samuel Ortom of Benue State on Wednesday paid a visit to the burnt Modern Market in Makurdi.

The market late hours of Tuesday was consumed by fire, the cause still remains a mystery.

Goods worth billions of naira were said to have been destroyed in the over 200 shops razed down by the inferno.

Ortom who was on the spot assessment of the market lamented the level of destruction in the market and promised to release the sum of N50 million to the affected traders while he admonished the traders to have faith in God saying,  ‘when there is life, there is hope.

According to him, ‘this is one incident too many,  recalled that we had fire incidence in Gboko market, Wadata market and now Modern market.

” And for the Modern market, this is the third time it is happening within a few years.

“This alone is one too many and we do not deserve it again. We pray it never happens again and we must take some proactive steps to ensure it doesn’t happen again.”

The governor who promised the traders that the state government would not abandon them said that a commission of inquiry would be set up to identify the immediate and remote causes of all the fire incidences in the market so as to ensure that such incident does not happen again.

He said that the Commission would among other things look into the issues surrounding the suspension of the market Union as well as seek ways to ensuring that all parts of the market which had been burnt down are rebuilt.

ALSO READ: ‘Abuja art and crafts village not for sale’

Speaking earlier,  the Ter Makurdi, HRH Sule Abenga who sympathized with all the affected traders urged them not to despair but trust in God to bring them out of the predicament.

The traditional ruler who noted that the fire incidence had affected the economy of the state also called on the federal government to assist the state government in ameliorating the plight of the people.

Some of the traders lamented the fire incident saying that traders have all closed for the day when the fire started.

“At the time I raced to the market, the who shops on our lane had been burnt down, so I could not salvage anything from the shop” one of the traders, Madam favour lamented.