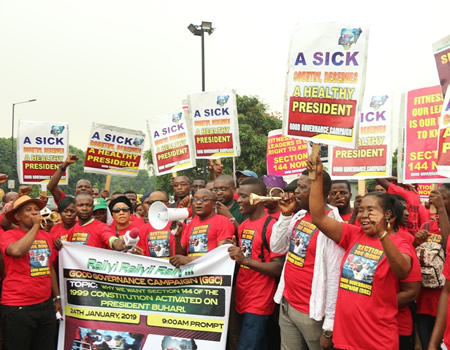 PROTESTERS under the aegis of Good Governance Campaign (GGC) on Thursday in Lagos staged a protest, demanding that the National Assembly should invoke Section 144 of the 1999 Constitution by setting up team of medical experts to look into the health status of President Muhammadu Buhari, declaring that Nigeria as a country is sick politically, economically, among others because it’s president was also sick.

The protesters, who were decked in T-shirt, with the inscription: ‘Section 144’ in front and ‘Presidency not a sick bay’ gathered at the old Toll Gate along Lagos/Ibadan Expressway to make their demands as they also sang various solidarity songs.

They insisted that President Buhari was sick and not fit to continue to govern the country, saying that such incapacity on his part had accounted for why Nigeria was equally sick economically, politically and socially, even as they urged the citizens to rise up and take their destiny in their hands and not allow some cabal to hijack the country.

Addressing newsmen, President, Campaign for Democracy (CD), Comrade Abdul Usman Bako, said the call on the National Assembly to effect the provisions of Section 144 of the 1999 Constitution became imperative because Buhari was no longer fit to pilot the affairs of the country, recalling that he had shown this failing health during his campaign outings.

According to Bako, who lamented that Nigeria was currently at a crossroad, Buhari stumbled in the campaign rallies he went for in Kogi and Kaduna, accusing some cabal of trying to insist that President Buhari should continue in office because of their own selfish interest.

“Mr President is not fit in all the campaigns he has been attending. In Kogi, he almost stumbled, in Kaduna, he almost stumbled. We are calling on the National Assembly to effect the provisions of Section 144 of the constitution to let us know the true health status of our president.

“Nigeria is at crossroads, let’s be brave, let’s be dogged in this movement,” the CD president said, pointing out that he had to come down to Lagos from his base in the North to be part of the protest.

Deputy President of Campaign for Democracy (CD), Comrade Adebayo, while also lamenting that the country’s economy was sick, among others, declared that “we cannot afford to have this president again.”

“The country belongs to all of us, we must all galvanise to move the country forward, we cannot continue to have a president who cannot hear what we are saying and journalist would be interpreting to him,” he said.

According to Comrade Adekunle Adesokan, who also addressed newsmen, a country having a sick president presiding is sick as well, declaring that Nigeria currently had a sick and lifeless president and, therefore, the need for him to make his health status known to the citizens.

In his own address, President, Guild of Public Affairs Analysts of Nigeria, Comrade Ayo Baje, said it was time for the National Assembly to constitute a panel of medical experts to probe into the health status of President Buhari in order to enable Nigerians to know the true picture, lamenting that what operated under the present dispensation was government of the few and not that of the people as enshrined under democracy.