Olola Olabode Ogunlana, author and member of the Nigeria-Britain Association, was recently at the British Council, Lagos, to present his collection of works to members of the association and other eminent guests. In this interview by Akin Adewakun, the Ogere-born octogenarian relishes what growing up was like in a more serene and beautiful Lagos, under the British rule. 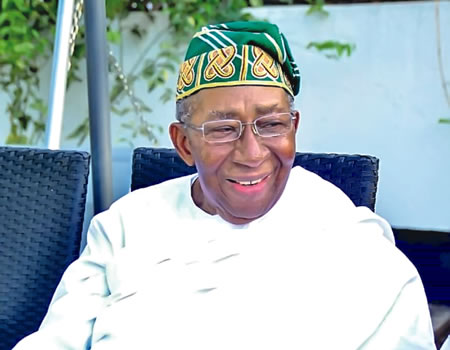 What is the significance of today’s event?

It is to acquaint the younger ones of the activities of the Nigeria-Britain Association (N-BA). You know the British had it a free game, when they were here. They had everything to themselves. Everything here was British, no competition. But with the approach of independence, people started to wonder how best to keep the relationship between these two countries going. So they started this association to consolidate the relationship between Nigerians and British, and the counterpart, the Britain-Nigeria Association was also started in England. I was a member of both. The idea is to strengthen relationship, and what we are doing here (book reading), today, is a way of reinforcing such relationship. You see good relationship is very important, even in a globalised world. I’m sure that back there in Britain they are having a second thought, concerning recent developments in the country. We begged them to stay with the commonwealth and not go to Europe, they refused. Now they have this problem of Brexit on their hands. And what it simply means is that after Brexit, they are going to need Nigeria, Ghana, Sierra Leone, Uganda,  Kenya and all the people they had earlier rejected.

You talked glowingly about the British rule in Nigeria, during your presentation, earlier. But, many Nigerians would rather attribute some of the challenges facing the country today to what they term ‘British misrule’. How do we reconcile such opposing views?

There is nothing to reconcile. As I said earlier, it depends on your perspective. Many people walk around without opening their eyes. The British were our colonial masters, and like I said, they took away our oil, rubber and cocoa. But they also left us some things. They brought Christianity, western education, left us with very good armed forces. For instance, our politicians would readily say the British came here took out the wealth and damaged the whole place. But, the question is since they (the politicians) got there, have they done any better? I still insist Britain left us the best army, that is the best trained armed forces in the whole of Africa. Our  civil service, then, was rated the best in the whole of Africa. That is why I always emphasise the importance of storytelling. The need to know yesterday, today and tomorrow, that is the trinity of time.

That was why I used myself as a personal example of the legacies that the British left in Nigeria. You know today’s event is about examining some of those things that the British left behind. If you are  therefore looking for such British ‘leftovers’ in Nigeria, I’m one of them. I experienced British rule in Nigeria and I know some of the positives, compared to what we are having now. I believe it depends on who is talking about the British ‘leftovers’. The point remains that despite taking advantage of our resources, the British still left some solid legacies, in terms of quality administration.

You seem to place so much emphasis on storytelling, but how relevant is this art to our national life today?

Well if you look at it well, yesterday, today and tomorrow are like a trinity, and it is through story telling that we can weave this trinity of time  together. It  is through storytelling that we can connect the present with the  past, with the aim of  planning for the future. Story telling is to amuse, to entertain, to teach and tell the younger ones about the history and the culture of their people. For me, any country without history, well I better don’t say what I have in mind.

History is no longer being given a pride of place in our schools, what do you think would be the trickle-down effects of this on our society?

To start with, it’s a shame that we are even conversing in English. If it were possible, I would have loved the chat conducted in our local dialect; since that is one of the ways to identify with such culture. We should learn from the common saying that: He who does not know yesterday, would not value today, and for such individual to prepare for tomorrow will be difficult. We must learn from history. We have some bad leaders. They withdrew history from the curriculum. They felt by doing so they would be able to cover their track. But they can’t.

It is like a smoke, nobody can cover it. It will always filter out. So we must study history, we need it. For instance, we don’t have a Nigeria now, what we have is mere geographical expression. Do we have a Nigeria? Are you a Nigerian? I’ve asked these questions, severally, and nobody, including a university professor, could give a satisfactory answer to them. I think all these questions are coming out because of our disdain for history. We really do not care to know about our past. Our concern is only about the present. Many Nigerians today are more committed to their ethnic cause, rather than the national cause. The question we should be asking ourselves is, why?

But what is the way out?

Our leaders must work very hard to put the various strands together. We have Federal Character Commission, but how active is the commission? So we have to get  serious as a nation.

A moment ago, you gave a picture of what Lagos looked like, while you were growing up, and how some of the streets in the metropolis derived their names. What would you say is the difference between Lagos, then, and now?

Let me tell you, it’s not only Lagos, for instance, that was birthed in history. Many other towns also did. For instance, Lokoja, in today’s Kogi State, was the first place the British settled in when they first came. The real name is Loko ja. ‘Ja’ in Lokoja here simply means red, and the same thing applies to Abuja, Suleija and all others. Talking about Lagos, you find it interesting how some of the city streets’ names were derived. For instance, the popular Apongbon simply derived its name from the  advent of a whiteman, with a brownish beard, who was a cigarette merchant in the area, then. The white man sold all sorts of cigarettes, and you were sure in those days that you were going to get your choice, as a smoker on getting to his store. So the word Apongbon simply means the man with a red beard (Apon  lagbon). In other words, where we call Apongbon today was the location the man with the red or brownish beard was selling his cigarettes, then. Besides, Lagos was the place to be, then, because of its  serenity and beauty. We had a more serene, beautiful Lagos during the British rule. It’s one of the legacies the British left. I remember, as a student then, that is during colonial period, we were told, by the uninformed that the white men were only using their culture (education) to brainwash us, and that they were not actually sincere about giving us quality education. Those saying that then weren’t very sure of the British intention in giving us education, but we know better today.

Our reading culture is waning and the internet seems to be a major challenge. How do we rekindle this very important culture in the younger ones, today?

We should lead by example. As a parent, when your children see you reading, they’ll emulate you. Children pick and do what they see the older ones doing. If they don’t see their parents reading, discussing, telling stories, they won’t do it. For instance, I still tell stories to my grandchildren, just like my grandfather who died in 1939 also did for me, while I was growing up. There is a vast opportunity for us to be better than what we are today, if we revive our reading culture.

What would you say inspire you as a writer?

Well I love story telling. I like to know about what happened before and how we can do it better. One of the things that still guide me today is a nursery rhyme I learnt in 1938 at St. Paul’s Breadfruits Primary School, Lagos. It says: ‘Good, better, best. May I never rest, until my good is better, and my better is best’. It was the principle in that rhyme that inspired me to build SCIB Insurance, then. Interestingly, I’m still guided by that principle. I’m still working towards making my better, best. That is why I’m still a student now, even at over 80 years.