•Occupy the expanse of land 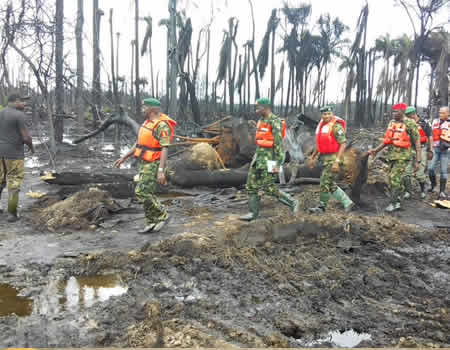 Share
Angered by the mindless destruction of the ecosystem and huge loss to the oil-economy of the country, Nigerian soldiers have taken over an expanse of land used as illegal refineries at Otumara Community in Warri South-West Local Government Area of Delta State.
Although no arrest has been made at the site as perpetrators of the economic sabotage fled into the woods on learning that soldiers had occupied the area.
The permanent occupation by the combatant soldiers Sector 1 Operation Delta Safe (OPDS) was embarked upon to stamp out oil theft and subsequent “cooking” that have characterised the community for several months in spite of several raids and destructions carried out.
Troops drafted from the Sector 1 Operation Delta Safe, led by the Commander, Colonel Habib Baba Manu, on Monday evening, had taken strategic positions to permanently halt the illegal business to salvage the economy and the environment.
Colonel Manu, while speaking to journalists during the raid, said: “We will clean up this mess but definitely, it will take a while.”
Curiously, the commander disclosed that troops had been raiding the illegal site for the past 11 months and each time they withdrew, having destroyed the facilities, the hoodlums returned to continue with their economic sabotage.

Tribune Online observed at the site that the activities of the illegal crude oil refining have taken their devastating toll on the ecosystem such that no aquatic life could be sighted.
Angry Manu, therefore, vowed that “It is something we will continue to intensify and ensure that our troops remain responsive to their duties,” warning that any suspect caught would be dealt with in accordance to extant laws.
Speaking further on how embittered they are with the economic saboteurs and the devastating effects, the Deputy Director, Army Public Relations Officer, Col. Aminu Illiyasu, described the location at Otumara community as notorious for illegal refineries.
He justified this notion with the fact that the location has been raided at different times by OPDS operatives and other sister security agencies in the past eleven months without the criminality abating.
He said: “The location has been particularly notorious as an illegal refinery. Today’s own is the third. Anytime such an operation is conducted, the place is being destroyed.
“Troops will keep monitoring activities in the place and will still come back to what you have seen. The last destruction of their activities in this place was done six days ago,” he lamented.
Col. Iliyasu hinted that the General Officer Commanding the Nigerian Army 6 Division, Major General Jamil Sarham was at the location last Friday for an on-the-spot-assessment of the raped expanse of land.
Describing the consternation that greeted his boss, Illiyasu enthused that “Immediately he saw the level of carnage, he directed the Commander, Sector 1 to deploy more troops to destroy equipment that are here and not only that, occupy the land with soldiers permanently.”
According to the military image-maker, “Now you have to appreciate this and I want to let you know that despite all our efforts, there are still some people that think they can subvert whatever the country or the leadership of the country is doing because to me, this is one of the greatest economic sabotage to this nation.
“Aside that, when you look around, you will be able to appreciate the level of environmental damage that this has caused and is still causing.
“You will get to know that the proceeds from this illegality is being channeled to further more illegalities like illegal drugs smuggling, illegal arms smuggling and sponsoring other crimes.
“I know with the deployment of these troops, you can see them all around. The next thing is that those owners of this place that have been put out of this illicit business will naturally want to hit back.
“We are waiting for them. They may want to go in the way of blackmailing the security agencies for these efforts because we are putting them out of business. Not only that, we have occupied this place permanently.”
Col. Iliyasu thanked the Delta State government for its support for the operations of the Nigerian Army and other security agencies in stamping out the menace.
As of the time journalists were taking their leave, troops were keeping vigil at the battered site harbouring camps of illegal artisanal refinery camps.