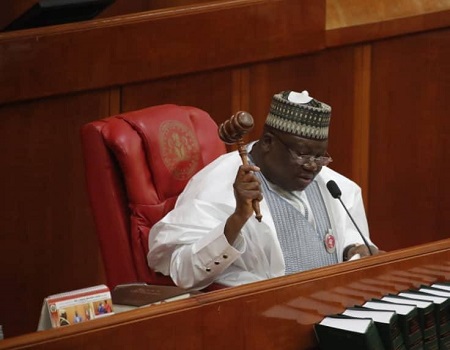 The Senate has approved the 2019 budget of the Niger Delta Development Commission (NDDC) after the consideration of the report presented by the Senate Committee on Niger Delta.

The budget of N346,388bn comprised of N22.338bn for personnel, N13,466bn for overhead and four billion for the internal capital budget.

The budget sum of N306.bn has been proposed for the project development in the Niger Delta states.

This was as the President of the Senate, Ahmad Lawan, urged the NDDC Committee to work on the 2020 Budget and report back to the Senate within two weeks to enable the upper chamber to pass it on a good time.

The budget proposal was for 2019 and Chairman Senate Committee on Finance, Senator Solomon Olamilekan, argued that the Senate has successfully aligned National budget to the cycle of January to December for the 2020 fiscal year which is currently running.

He wondered why any agency of the Federal Government would still be seeking for approval of its 2019 budget, thereby jeopardising the effort so far made to make an impact with the budget through implementation.

Senator Olamilekan (Lagos West) observed that “we are in 2020; the Federal Government has passed 2020 Appropriation Act into law, this is 2019 budget.

” If you look at the document soliciting the fund contribution of the Federal Government is about N120 billion and now we have returned government to January to December in terms of revenue.

“By now I believe what we should have before us is the 2020 appropriation bill of the NDDC,” he wondered.

Senator Bassey Albert further queried the rationale for an elapsed budget given the new budget cycle.

His words: “Unless the chairman of the committee is going to convince the chamber that he is already processing NDDC’s 2020 Budget. Outside that, I don’t think they can earn anything from it.

Explaining the peculiarity of the budget, Chairman Senate Committee on Niger Delta, Senator Peter Nwaoboshi, said while it was not opposed to aligning the budget to federal budget, there was a need to legalise the activities of the NDDC in 2019 because projects have been executed in the budget.

He further informed the Senate that the budget was lately considered because the Senate had taken a stand that it will not deal with the board until the crisis over its board membership was resolved.

This, he maintained, was partly responsible for the delay in the budget and consideration a motion that was dismissed by the President of the Senate.