Hoodlums set over 20 houses, shops on fire, destroy properties worth millions of naira 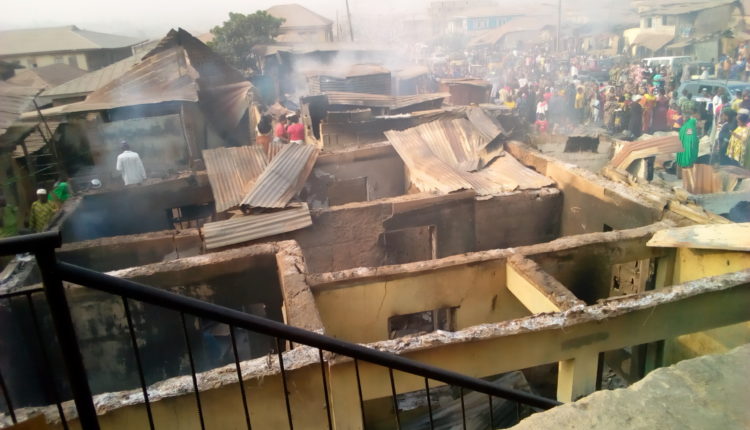 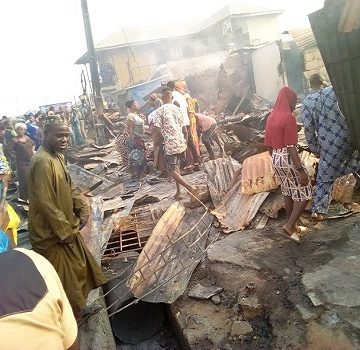 Hoodlums from a yet to be identified group at Idi-Arere/Sakapena area in Ibadan, Oyo State capital in the early hours of Sunday set over 20 houses on fire in what was described as a clash between two rival gangs in the area.

The suspected troublemakers, sources informed TribuneOnline that their gang identity remained unknown as at Sunday morning but established that some of the guys harbouring and living within Idi-Arere/ Sakapena area have a disagreement with several gangs from other locations in the last few months in the city which had resulted in reprisal attacks.

The sources then hinted that such malice and disagreements triggered little crisis at short notices.

The affected structures were on both sides of the road from Idi-Arere axis down to Sakapena side by the side of a filling station owned by a popular politician.

TribuneOnline’s investigation also revealed that Sunday’s attack came around 2.00 am and was described as reprisal attack of several clashes between the rival groups for some time.

In a swift reaction, Oyo State Police Command said it has arrested 11 suspects involved in the crisis, noting that police have also commenced 24 hours surveillance on the area.

The attackers were said to come with dangerous weapons such as guns, cutlasses, axes and knives, shooting sporadically into the air as they announced their arrival to the area in a dangerous manner.

Sources further informed that the gang clash had been on for about two weeks now in various locations in Ibadan, with different groups ready to strike at any available time of the day suitable to carry out their acts.

According to sources, Sunday’s attack at Idi-Arere was as a fall-out of an attack of some gangs from Idi-Arere alleged to have meted out on a rival gang but they were caught unaware on Sunday.

It was gathered that one of the targets is one of the ringleaders identified as Minister whose father’s house is located around the affected area. But the house in question was eventually protected from the attack by boys loyal to Minister who regrouped while the crisis lasted.

It was also gathered that the loss could have been worse if not for stiff resistance from Policemen, some local vigilance groups and other tough residents from the areas who ward off the attackers for almost an hour.

Some of the victims, TribuneOnline gathered include an Igbo man with pharmacy shops, another selling electronics as the two were said to have just stocked their shops on Friday and Saturday got their shops burnt to ashes.

Others include a sewing mistress whose one of her apprentices was billed to graduate on Sunday afternoon as her sewing machine got burnt in the inferno.

The attackers another source informed that the attackers looted some shops before setting the area on fire. As early as 5.00am, shop owners were receiving telephone calls to intimate them about the developments.

The victims who could not control their emotions, TribuneOnline learnt have been put under strict medical monitoring by their relatives.

On Friday, another rival gang with the intention to kidnap another ringleader of a gang in Kosodo, who resides around Kosodo Oranyan area struck and destroyed properties worth millions of naira.

Again, In Asaka area/ Ita Saku on Thursday in broad daylight, another gang in retaliation swooped on the entire area and held them hostage, burning several houses in the process while another clash as a result of paternity crisis between three groups has also led to the death of eight members of the groups while the crisis lasted.

When contacted, the Police Public Relations Officer, Oyo State Command, Superintendent of Police, Adekunle Ajisebutu who confirmed the incident further revealed that the state command is currently patrolling the area to avoid further breakdown of law and order.

He said: “Normalcy has been restored in the affected area. The State Commissioner of Police, Abiodun Odude, has directed the policemen drafted to the area to carry out intensive patrol as well as 24hrs surveillance to avoid further breakdown of law and order. While directing that the 11 suspects including their ringleaders arrested be charged to court immediately after the conclusion of investigation. The CP warned he warned hoodlums and other criminal elements against the wanton destruction of lives and property.”

Ajisebutu further added that “investigation to determine the cause and motive behind the incident is ongoing.”