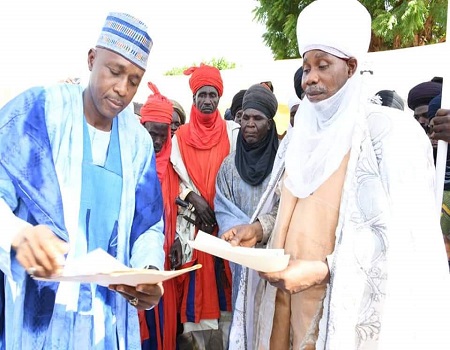 Gombe State Governor, Muhammadu Inuwa Yahaya has approved the appointment of Alhaji Abubakar Ali as the new Emir of Yamaltu in Yamaltu/Deba LGA of the state.

The appointment was contained in a letter signed by the Permanent Secretary, Ministry for Local Governments and Chieftaincy Affairs, Alhaji Mohammed Manu Malala copies of which was made available to Journalists in Gombe late Wednesday evening.

The appointment according to the letter is in the exercise of the powers vested in the Governor under the Creation of Emirates, Districts, Villages, and Wards as well as Appointment and Disposition of Emirs and Chiefs and based on recommendations of the kingmakers of the Emirate.

While presenting the appointment letter to the new Emir at Yamaltu Emirate in Dadinkowa, Yamaltu/Deba Local Government Area, the Permanent Secretary, Ministry for Local Government and Chieftaincy Affairs, charged the monarch to be magnanimous in victory and embrace all and sundry in the area.

He assured that Governor Inuwa Yahaya led administration will continue to accord special recognition and respect to the traditional institution in the in view of its role in the maintenance of peace and social cohesion.

While wishing the new Emir a peaceful reign, he called on all sons and daughters of Yamaltu Emirate to support the stewardship of the traditional ruler.

The new Emir, Alhaji Abubakar Ali in his response thanked Governor Inuwa Yahaya for creating an enabling environment that led to a peaceful and transparent process that saw his emergence as the Emir of Yamaltu and promised to run an open-door policy where all views will be heard and respected.

Born on 2nd February 1960, Alhaji Abubakar Ali was until his emergence as the new Emir of Yamaltu, the District Head of Hinna in Yamaltu Deba Local Government.

He holds a Masters Degree in Business Administration, Post Graduate Diploma in Accountancy and Financial Management.

The new Emir held the position of State-Auditor General for Local Governments and Bursar, Nigerian Institute of Transport Technology, Zaria as contained in a statement by Ismaila Uba Misilli, Senior Special Assistant, Media and Publicity to the Governor of Gombe state.