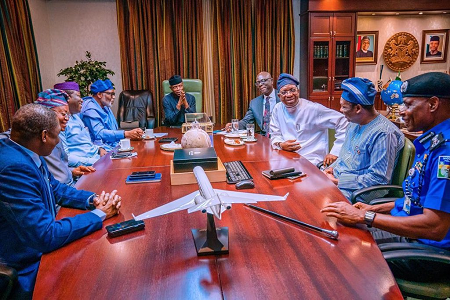 The Federal Government and governors of the South-West States have reached an agreement on the establishment of the regional security outfit, Amotekun.

Vice President Yemi Osinbajo met with state governors and the Attorney-General of the Federation and Minister of Justice, Abubakar Malami, who has declared the initiative illegal.

ALSO READ: Christians have become endangered species in Nigeria ― CAN

The governors at the meeting, which took place in the Vice President’s office include the Chairman of Nigeria Governors Forum (NGF) and Ekiti State governors, Dr Kayode Fayemi, Governor Gboyega Oyetola of Osun State and his Ondo State counterpart, Rotimi Akeredolu, as well as deputy governors of Lagos, Oyo and Ogun States.