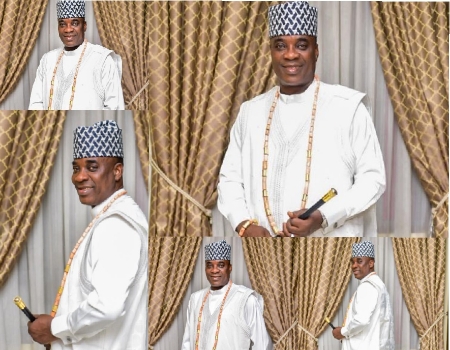 Share
The Alaafin of Oyo, Oba Lamidi Olayiwola Adeyemi III, has broken his silence over the heated reactions generated by his statement over the Mayegun title he conferred on the fuji musician, Alhaji Wasiu Ayinde, stating that the context through which he made the statement should be understood.

Oba Olayiwola said he would not spit at Yoruba traditional institution by asking Ayinde to disrespect traditional rulers.

He, however, stressed that attitude of those he described as self-styled monarchs, caused him to restrict Ayinde from prostrating to some categories of traditional rulers.

He said he did not instruct Ayinde to see the likes of the Ooni of Ife, the Orangun of Ila, the Awujale of Ijebu-Ode, the Owa Obokun of Ilesa, the Alake of Egba and stretch his hands to them either in private or public gatherings.

“That would mean desecration of Yoruba culture and tradition which these first class royal fathers symbolise. There must always be an exception. But I am saying it with every sense of responsibility and authority conferred on the Alaafin institution that one who holds title from the Alaafin is found suitable for the title, hence the need for him to comport himself in such manner because the Mayegun title from the Alaafin is rooted with tradition,” he said.

Oba Adeyemi cautioned the public on the use of social media, saying the raging outburst recorded after his statement was a deliberate transfer of the clogged mindset of those who had an axe to grind with Ayinde for reasons best known to them, insisting that the fuji act merited the Mayegun title having distinguished himself as a focused musician who had improved himself on his trade since the beginning of his musical journey in the early 80s.

The Alaafin also revealed that Ayinde had made a request for the title 11 years ago during his visit to his palace in the company of his friends and associates.

He further revealed that he turned him down having made spiritual and physical consultations, all of which guided him against approving the title, saying, he only approved of it when the coast was clear, adding that there was no reason to waste time over it.

“When he asked for it 11 years ago, I consulted with my forefathers and the Oyomesi. They did not give consent to it, and I told him to return home. But when the time was ripe now, I made same consultations, and it was approved.

“Let it be known that the Alaafin is an institution which is bigger than an individual. I don’t do things unilaterally because I know the implication of such actions. I wrote a publication in 1975 titled Oyo tradition and Modernity. People should go and read it to know the status of Oyo in Yoruba nation.

“Whoever has any issue with Ayinde should find other ways to settle it. Social media should not be turned to a medium for vendetta,” Alaafin advised.