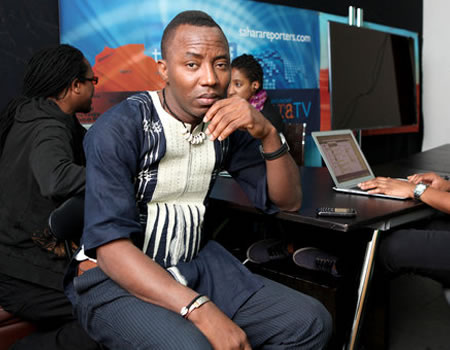 The Federal High Court in Abuja, on Thursday, granted the Department of States Service (DSS) permission to detain the publisher Omoyele Sowore, the publisher of SaharaReporters and convener of RevolutionNow protest, for 45 days.

Ruling on an ex parte application by the DSS, Justice Taiwo Taiwo, held that the detention order is renewable after the expiration of first 45 days on September 21.

The DSS had arrested Sowore in his hotel room last night Saturday in Lagos, two days before he could hit the streets with his followers for the Monday, August 5, RevolutionNow protest, but which eventually held in his absence.

On Tuesday, the DSS had filed a suit praying the court to allow it detain Sowore for 90 days to investigate him over his call for revolution protest, which the police had termed a treasonable felony offence.

The DSS premised its application for Sowore’s detention on the provision of section 27(1) of the Terrorism (Prevention) Amendment Act, and ruling on ex parte application, without counter-argument by Sowore’s legal team, Justice Taiwo, said he had to grant the application.

He however, said his granting of the application is “only to the extent” of allowing the security agency to keep the respondent in custody for only 45 days for the applicant to conclude its investigation.

According to the judge, the hearing of the application was one-sided as provided by 27(1) of the Terrorism (Prevention) Amendment Act, he however, said, the use of the word,  “may,” in the provision “is directory” and not “discretionary,” as a result, he said he would be failing in his duty not to grant the request for a detention order.

Justice Taiwo, however, said if the applicant require more time to conclude its investigation after the expiration of the first 45 days, it had the liberty to apply for its renewal.

According to the vacation judge, Justice Taiwo, the order takes effect from Thursday, August 8.

Sowore, who is the publisher of Sahara Reporters and Presidential Candidate, African Action Congress (AAC) in the February 2019 general elections, was arrested in the early hours of Saturday, August 4 by the operatives of the DSS in a hotel in Lagos, after which he was moved to Abuja same day.

The state agency said Sowore was arrested on account of the #RevolutionNow protest which he had spearheaded.

At the hearing of the suit for Sowore’s detention in court on Thursday, officers of the Nigerian police were seen stationed at strategic places, with tight security put in place to forestall a possible breakdown of law and order.