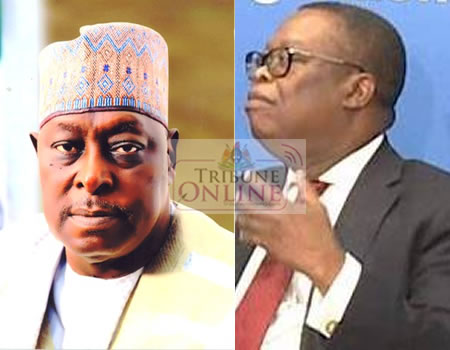 PRESIDENT Muhammadu Buhari may have at last acted on the Vice President Yemi Osinbajo panel’s Report on the former Secretary to Government of the Federation (SGF), Babachir Lawal and former Director General of the National Intelligence Agency (NIA), Ayo Oke as he has now ordered the sack of both men.

In Lawal’s place as SGF, he has appointed Boss Mustapha.

A statement issued by Special Adviser to the president, Femi Adesina, in Abuja on Monday said Buhari has studied the report.

The panel investigated allegations against the hitherto suspended Lawal and Oke.

The statement said the President accepted the recommendation of the panel to terminate the appointment of Lawal and has appointed Mr Boss Mustapha as the new Secretary to the Government of the Federation.

It added: “President Buhari also approved the recommendation to terminate the appointment of Ambassador Oke, and has further approved the setting up of a three-member panel too, among other things, look into the operational, technical and administrative structure of the Agency and make appropriate recommendations.”

The former SGF was investigated over the diversion of millions of naira belonging to the Presidential Initiative on the North East (PINE) while Oke ran into trouble with the discovery of $43 million in a residential flat at Osborne road in Lagos.

The president had ordered the suspension of the two former senior government officials in April and set up a three-man panel headed by the Vice President to Investigative the allegations against them.

The panel had been given 14 days to turn in its report.

A statement issued by Adesina at the time had said: “President Muhammadu Buhari has ordered an investigation into the allegations of violations of law and due process made against the secretary to the government of the federation (SGF), Mr David Babachir Lawal, in the award of contracts under the Presidential Initiative on the North-east (PINE).”

“The president has also directed the suspension of the SGF from office pending the outcome of the investigations.”

“In a related development, the president has ordered a full-scale investigation into the discovery of large amounts of foreign and local currencies by the Economic and Financial Crimes Commission (EFCC) in a residential apartment at Osborne Towers, Ikoyi, Lagos, over which the National Intelligence Agency (NIA) has made a claim.”

“The investigation is also to inquire into the circumstances in which the NIA came into possession of the funds, how and by whose or which authority the funds were made available to the NIA, and to establish whether or not there has been a breach of the law or security procedure in obtaining custody and use of the funds.

“The president has also directed the suspension of the Director General of the NIA, Ambassador Ayo Oke, pending the outcome of the investigation.

“A three-man committee comprising the Hon attorney-general of the federation and minister of justice, and the national security adviser, headed by the vice president, is to conduct both investigations.

“The committee is to submit its report to the president within 14 days.

“The most senior permanent secretary in the SGF’s office, and the most senior officer in the NIA, are to act, respectively, during the period of investigation.”