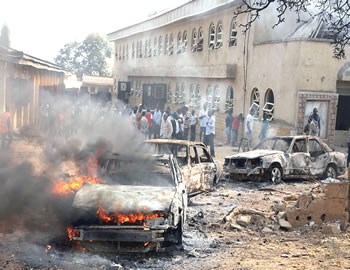 The Police Command in Borno has confirmed the killing of two persons after a suicide bombing around Muna garage in Maiduguri, on Thursday.

The spokesman of the command, Mr Victor Isuku, stated this in a statement in Maiduguri.

“About 2106hours of Wednesday, an explosion occurred at Muna garage along Gamboru Ngala road Maiduguri.

“Two persons, including the suicide bomber, died on the spot while a Mercedes Benz car with registration number, AX 571 ABJ, parked by the road side was damaged by the impact of the explosion,” Isuku said.

He, however, said that normalcy has returned to the area.

It would be recalled that last Friday, a suspected suicide bomber detonated explosives at the entrance of Muna garage, killing himself alone.

The same Friday, another bomber killed himself and two vigilantes a few metres away from Gamboru-Ngala road, almost the same time while another bomber was killed before gaining entry into the Custom House refugee camp.