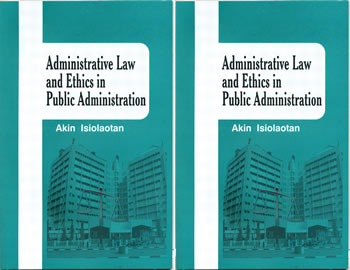 A review of Akin Isiolaotan’s book,  Administrative Law and Ethics in Public Administration by Lasisi Olagunju.

This is a 44-page specialised book on Administrative Law and Ethics in Public Administration. The objectives of the author are implied in the title and also, clearly set out by him in the Preface.

The author situates the functional context of the book in what he describes as “the non-practice of ethics in public administration” in the country which he says, has created “the problem of inefficiency and breaches by civil and public servants caught in the web of violations of ethics.” He also seeks, through this book, to clarify for students of law, “what administrative law is, as distinct from constitutional law.”

Written in simple, easy-to-read language with a style I will describe as very lucid, the five-chapter book is an excursion into the world of this branch of Public Law. In plot and in form, the book is logically structured in such a way that achieving the stated objectives becomes like building a multi-storey building by a skilful engineer.You cannot properly explain a phenomenon without first setting out its key components in clearly defined terms.  If you want to help students solve the befuddling problem of confusing Administrative Law with Constitutional Law, you must set out by operationalising the key concepts in each of them and those terms straddling both areas of law. Thus, chapter one is dedicated to conceptual clarifications explaining concisely but exhaustively, what Administrative Law means and what Constitutional Law contains. Other concepts that arevery key in any sensible discussion of these topics such as Rule of Law, Separation of Powers, Ministerial Responsibility and Parliamentary Sovereignty are well defined in the opening chapter.

The next chapter dwells on what powers administrative bodies have under our laws. Thus, issues such as delegation of powers, justification and criticism of the practice ofpower delegation, rule making procedures and the rules governing delegation of power are treated here.

Chapter three speaks to the checks on the powers of administrative bodies and organs- by the legislature, the executive itself and control by the judiciary.

Chapter four is on Administrative adjudication in line with separation of powers. It contains a whole range of administrative bodies empowered by law to exercise adjudicatory powers, the over-arching rules guiding the exercise of such powers and the remedies available for victims of rights violation in the exercise of these powers.

If chapter one is the take-off of this book’s aeroplane and chapter two, three and four represent the levelling and the cruising stage, then chapter five is the landing. And how successful has the author, the captain of this plane, carried out that task? Remember he did not just set out to write a book for the sake of writing. He states clearly in the preface that re-inventing an ethical society anchored onthe respect for the Rule of Law and practice of ethics in public administration is one cardinal goal of his effort.And so, he appropriately titles the last chapter: Ethics in Public Administration. Here, you find an exhaustive discussion of what Code of Conduct means, who it is meant for, what it ismeant to achieve, the implications of infractions and violations of the code.

He then caps that chapter with what he describes as the three theorieswhich he honestly attributes to one ChineduEkeke which he posits  drives the serial rape of the nation’s values, ethos and ethics and the subversion of whatever objective the makers of the Code of Conduct had in mind.

The first theory he calls: Chop but do something–“created by a wicked and mischievous tribe of rulers, exported to the streets for purchase wholesale by the masses and sustained in circulation by both the rulers and the ruled”to give legitimacy to what he describes as  “monumental treasury lootings.”

The second theory, according to the author, is: Chop I chop – a “summary of the benefits of forming a workable collusion before, during after the act of stealing public funds.”

The third street law is what he describes as: Do something for Ya people- which gives ethnic legitimacy to thievery and plunder of the national till- a patrimony generally regarded as no man’s property.

The author concludes the book with a general overview of the problematic context under which the nation has, over the years, been trying to re-invent itself, fighting corruption and entrenching the Rule of Law in a cavalier context wheremoney is god,venerated and worshipped by almost everyone. While arguing that the get-rich syndrome and the misnomer called the “Nigerian factor” facilitate corruption and the progressive run downof the Nigerian nation, it is interesting that the author’s thesis is that “Nigeria needs more than laws to fight corruption.” It is hisargument that a vicious combination of sociological, legal and religious factors is responsible for the current elevation of corruption to a cardinalprinciple of state policy in Nigeria. He, therefore, posits that any serious war to fight and defeat the demon must be waged using platforms and weapons supplied from those contexts. In other words, he is connecting societal, systemic health to morality, religion and the law as recommended by Lord Denning, Master of the Rolls whose position is that: “Without religion, no morality, without morality, no law.”

Having gone this far, can one say that the author has addressed the purposes he set for himself at the beginning of this book. I think he has, substantially. And, I am not alone here, Oluwarotimi Akeredolu, SAN, in the Foreword notes that the “compelling” book, with “concise definitions and explanation of concepts” is timely, coming at a period when  “gross incompetence nurtured by mediocrity, nepotism, fraud and other vices has permeated all strata of public service.”In content and structure, the book tells us, from the legal perspective, where we are as a people, linking, seamlessly, the past with the present, the private with the public, the social with the psychological. It effectively takes care of all the concerns of Administrative Law – the actions and decisions of government decision makers, the right to appeal administrative decisions, and the resultant administrative reviews. The book is a complete,compact, carefully built vehicle, or should I say, a Noah’s Ark, needed by students of law navigating through the suffocating floods of our crisis-ridden school system and by political voyagers on the impossible ocean which Nigeria has become for all.

I congratulate the author for a successful effort and the publishers for a well edited book, carefully, fully referenced and indexed, elegantly designed and beautifully produced.

I strongly recommend this book to all of us- politicians, journalists, lawyers, all…”who care to know about their (basic) legal rights” in the context of our peculiar administrative set up.

Retiree shares his story in The Adventures of A Village Boy