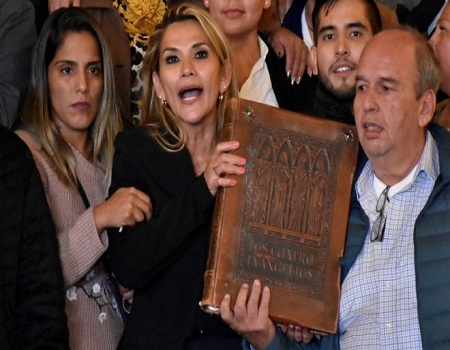 Bolivian interim President Jeanine Anez said on Thursday that exiled former President Evo Morales will not be able to take part in upcoming elections because he is barred from running for a fourth consecutive term.

Addressing a news conference, Anez added that Morales’ vice president, Alvaro Garcia, would also not be allowed to run for president.

Both resigned after a damning audit on vote irregularities was released and the head of the influential military suggested he should quit ending unrest after the disputed October 20 election. Morales later went into exile in Mexico.

Anez did not announce a new date for election but under the constitution must call for them within 90 days of her taking office on Tuesday.

Morales’ 14-year socialist rule ended in violent protests and recriminations after accusations of vote-rigging lobbed by his supporters in the Oct. 20 election. At least seven people have been killed in clashes between Morales’ supporters, opponents, and police since protests first erupted three weeks ago.

From exile in Mexico, Morales called for dialogue to help “pacify” Bolivia, asking the United Nations and Pope Francis to help. In an interview with Spanish daily El Pais published on Wednesday, Morales said he was still legally president because his resignation had not yet been accepted by the legislature.

The international reaction to the crisis is divided. Left-wing allies echoed Morales’ allegations of a coup and others cheered his resignation as good for democracy.

So far, the United States, Brazil, Colombia, and the United Kingdom have recognized Anez as interim president.

Russia, an important geopolitical ally of Bolivia under Morales, said on Thursday it was ready to work with Anez but noted that she had come to power without having a full quorum in parliament.

Other governments in South America such as Peru, Ecuador, and Argentina have held off on recognizing her.