Bike snatcher dies while escaping, 2 others arrested in Ogun 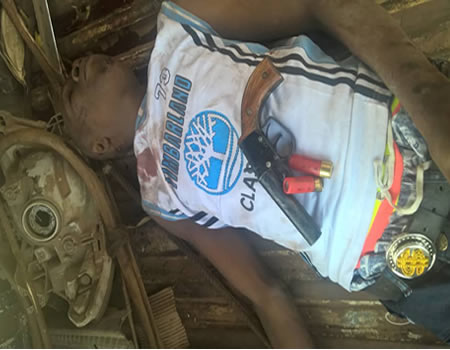 Two suspected motorcycle snatchers who specialised in robbing people of their motorcycle and taking such motorcycles to Benin Republic for sale has been arrested by policemen from Ogun State police Command.

Also, in a related development, another bike snatcher met his Waterloo on Saturday when he fell into a ditch and hit his on a concrete culvert while trying to escape after snatching a motorcycle from its owner, whom he also shot.

The arrested suspects, identified as Evans Ajaho (30) and Isaiah Aigba (21), were arrested at Baagbon village in Odeda Local Government Area of the state, following a distress call made to the Divisional Police Officer in charge of Odeda Division, CSP Mohammed Suleiman Baba that they snatched a Bajaj motorcycle at Alabata area at about 6:25 p.m on April 25.

The state Police Public Relations Officer, Abimbola Oyeyemi, an Assistant Superintendent of Police, told the Nigerian Tribune that the DPO led his men to block all the exit points in the area, an effort which paid off as the suspects were apprehended with the snatched motorcycle.

Oyeyemi said that during interrogation, Ajaho Aigba confessed to having been in the business of motorcycle snatching for quite some time, with ready buyers in Benin Republic.

In the second incident, the deceased bike snatcher reportedly snatched a motorcycle at Abule Ijaye area of Lafenwa in Abeokuta at about 4:45 pm.

According to the PPRO, “the armed robber, who pretended to be a passenger, boarded the motorcycle, but suddenly brought out a locally-made double-barreled pistol and asked the rider, Toyin Ayoade, to surrender his bike.

“While the rider was struggling with him, he shot him on the hand and took possession of the motorcycle.

“A distress call was made, which the people of the community to give the suspect hot chase. But as he was running away with the bike, he fell into a ditch and hit his head on a concrete culvert. He died on the spot.”

The image-maker said that a locally-made double-barreled pistol, two live cartridges and the snatched motorcycle were recovered from the dead suspect.

He added that the victim had been taken to the hospital by the Divisional Police Officer (DPO) Lafenwa Division, SP Mohammed Odunlami and was responding to treatment.

He said that the Commissioner of Police, Ahmed Iliyasu had directed that the suspects be transferred to FSARS for discreet investigation and prosecution.

Benue’s murder in the cathedral