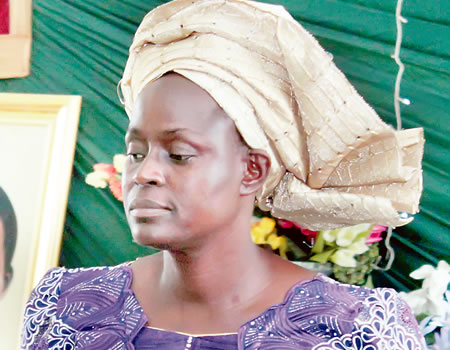 Prophetess Mary Omolara Alarape of Christ Mount Zion Bethel Healing Ministry, Asese, Maba, Ogun State, speaks on what God has declared for 2018, why prophecies don’t come true, how to handle domestic violence in marriages, among other issues, in an interaction with TribuneChurch. Excerpts:

PROPHECIES for Nigeria in 2018

God says there will be numerous blessings for those that serve him truthfully and have faith in Him alone. However, for those who believe in the things of the world, they should have a change of heart. This year, God is ready to really support those that trust in Him. These blessings can also be extended to the nation if we all repent and trust God for divine provision.

It is not uncommon for prophets to come under fire for unfulfilled predictions. Why do prophecies not come true?

Some prophecies do not come true because our God is a God that does what He wants to do. He is the unquestionable Lord. For instance, in the Bible, He told Isaiah to tell King Hezekiah that he would die. The same God also sent him back to tell him He had added to his years because he prayed to him and his prayers were answered. Most of the time, when there is a prophecy that something bad will happen, there are cases where there will be intercessions to avert such evil occurrences. God has the power to cancel any bad event. There is also the instance in the Bible when God sent Jonah to Nineveh and they accepted his message and repented, and the evil that had been prophesied would happen to them was reversed. So, sometimes, if some prophecies do not come to pass, it doesn’t mean the prophet did not see the vision clearly. It is just that intercessions have been made.

ALSO READ: End time is near

What is your advice for female clerics on ensuring balance between the ministry and the home?

My advice for them is that they should be submissive to their husbands. They should note that the home is the first calling and they should make sure they guide and provide adequate care before focusing on the ministerial work. By doing so, God will support their work in His vineyard.

Some churches are against women mounting the pulpit or holding leadership positions. How would you react to this?

God does marvelous things and He doesn’t discriminate. In the Bible, God called Deborah to lead the Israelites and she does it successfully without issues, as is evident in the book of Judges 4:4. The same God that called a male prophet is the same that also called the female counterpart. The work of God does not create room for barriers.

There are many reports on women encountering abuse in their homes, yet the Christian doctrine does not support divorce. Aside prayers, what practical ways would you suggest for a woman whose life is threatened by her husband?

Given the prevailing situation in the nation, we can all understand that things are hard. So, women should endure with their husbands and also be willing to persevere. They should also not be greedy because the devil capitalises on these issues to cause crisis in the family. Women must be determined to be submissive.

ALSO READ: The fuss about feminism

Obasanjo’s letters: The message and the messenger

End time is near —Prophetess Alarape