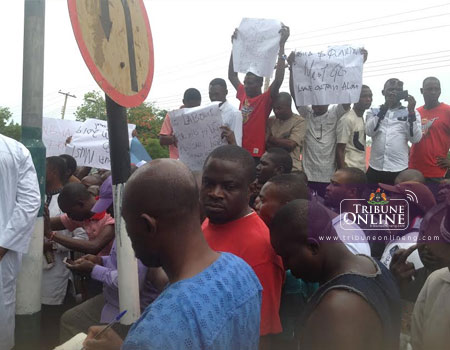 The protesters also accused staff of the Federal Ministry of Agriculture Quarantine unit of destroying their bill boards and usurping their duty of revenue collection.

The protesters for several hours barricaded the entrance of government house while disrupted free flow of vehicular movement to and from the seat of government.

The near violence attitude of the protesters informed the deployment of combined team of police, civil defence and military to beef up security and clear the road.

Despite the presence of the stern looking security agents, the protesters turned deaf ears to the plea of the leader of the combine team, Assistant Commissioner of Police, ACP, Emmanuel Adesina.

The protesters carried placards some of which read “we resist intimidation and harassment from Federal ministry of Agriculture and the police”, “Inspector-General of Police, IGP should leave Benue revenue alone”.

Secretary, Board of Internal Revenue Consultants Samuel Aku who addressed the state commissioner of finance, David Olofu accused police of aiding and abetting illegality in the state.

He said that the IGP monitoring unit had continued to extort money from traders who were supposed to pay revenue to the state and after collection of money escorted them out of the state.

“Just on Tuesday at Zaki Biam in Ukum local government, men of the IGP monitoring unit were collected   over N55,000 and diverted  more than 50 vehicles loaded with farm produce out of the State.”

“When our members approached them, they beat two of them (members) and were currently admitted in the hospital”.

“Imagine at a point, the Police covered their plate number and used their vehicle to escort more than 50 vehicles out of the State,” he decried

The protesters also accused the quarantine unit of federal ministry of works whose duty is to check the safety of animal, have taken over their duty of collecting revenue on produce.

Aku lamented that some of their offices have been destroyed by the Police.

Collaborating Aku’s views, Chairperson, Benue State Internal Revenue Services, Mrs. Mimi Azape Orubibi frowned at the activity of quarantine unit whose duty as enshrined in the Quarantine Law 1926 which has not been reviewed as having the responsibility to check and certify the safety of animal and food stuff and not to collect revenue.

She added that their job is technical and wondered why they should go about pulling down billboard belonging to the board.

“Our duties are supposed to be complimentary but they have gone ahead to collect revenue thereby denying the State of it share of internally generated revenue,” Mrs. Orubibi said.

She further alleged that two (2) of her staff was beaten up mercilessly in Zaki-Biam by the IGP monitoring team and 12 trailers loaded with farms were escorted out of the State by the same team.

Addressing the protesters, Commissioner of Finance Mr. David Olofu assured that government will act promptly on their grievance.

The state police spokesman, ASP Moses Yamu when contacted said that he was yet to be briefed on the allegation levelled against the police monitoring unit.

But he said that some youths on Tuesday from Katsina Ala smashed police vehicles and ran away before police could arrest them.

Why your boobs hurt