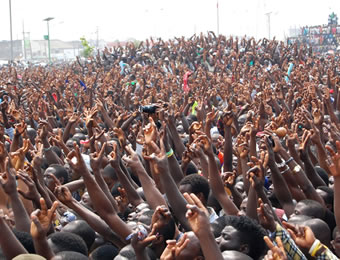 THE Christian Youths Coalition for Peace (CYCP) on Tuesday warned that setting up any other illegal group to torment the peace of the people of Benue state will further aggravate the peace efforts being put in place by the Federal Government and other stakeholders‎.
The chairman‎ of the coalition, Reverend Johnson Audu, while reacting to the threat by elder statesman and Chairman of the Northern Elders Forum, NEF, Chief Paul Unongo, that Benue people will organise armed youths to protect the state.
‎The leader of the coalition lamented that people have forsaken the path of dialogue for amicable settlement when disagreements sprout or disputes emanate.
“The quick resort to violence as a means of settling disputes is ungodly, retrogressive and offends both man and God. It is increasingly portraying us as beastly and intemperate.
“It is on this score that we unanimously frown and condemn the widely publicised media statements credited to a former Minister of Steels Development in Nigeria and Chairman, Northern Elders Forum (NEF), Wantaregh Paul Unongo, canvassing the songs of war or violent reprisals of Benue people against the violence of suspected Fulani mercenaries.
“Much as we frown at the actions of both sides in the dispute, the resort to violence is not the panacea and can never be a remedy. And much more, to understand that the drums of war are trumpeted by an elder statesman in the mould of Mr Paul Unongo is unpardonably misplaced and extremely dangerous.
‎The group said It is very concerned that Chief Unongo could publicly boast of raising an ethnic militia in Benue to launch a war on other parts of Nigeria, adding that, “These are very provocative and unconscionable outbursts from an elder statesman, who should be preaching peace, rather than violence.
CYCPNEF
Share

We are not a threat to you, Northern Elders tell Buhari