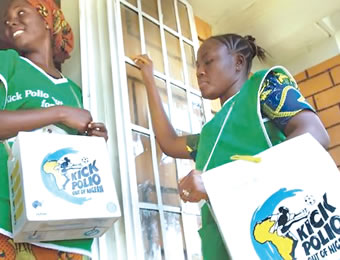 The Benin Rotary Club on Saturday called on mothers, schools, and religious organisations to open their doors for the vaccination of children from zero to five years against the polio diseases which has been curtailed globally except in Pakistan and Afghanistan.

The charity group made the appeal as part of the activities to mark this year’s World Polio Day, tagged, “Out Polio at Zero”, which holds globally on Sunday.

Speaking when the group had a roadshow to the Edo State Secretariat of the Nigeria Union of Journalists (NUJ), the Chairman, Edo State Polio Plus Representative, Oyaseh Ivowi, called on the media to be part of the advocacy for continuous vaccination against polio even though Nigeria is free, to ensure that the ailment does not resurface.

“Only two countries, Pakistan and Afghanistan, still have presence of polio globally. We are here to mark the day and to appeal to the media that the fight is not finished and the game is not over until every country of the world is polio free and we will not rest on our oars and we will continue to make sure that polio is at zero in Nigeria, Ivowi said.

The Cluster Consultant, World Health Organisation (WHO), Mrs Winnie Aigbojie, lamented that some mothers were denying their children immunisation and appealed that they should make themselves available for the next exercise.

She lamented that “during the last polio immunisation exercise, many mothers refused to bring their children out for vaccination. I am using this medium to send a message across that another exercise is coming up from 30th of this month to 2nd of November that our mothers should ensure that all children from zero to five years are immunised on polio, it is the normal polio vaccine that we are still giving to children so they should ensure that they bring their children forward to take it and school teachers should endeavor to allow our teams to vaccinate children in schools and also pastors and reverend fathers in churches, that is what we have been doing before, it has not changed, we want to keep polio at zero”.

Receiving the group, Chairman of NUJ, Sir Roland Osakue, pledged the continued support of journalists in Edo state on the campaign to sustain the zero level of polio in Nigeria.