Bearded woman makes it into Guinness Book of World Records 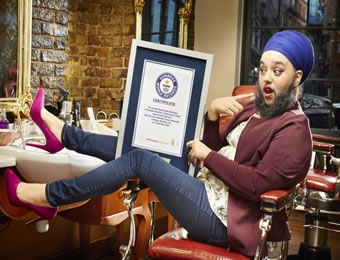 A beautiful bearded woman, Harnaam Kaur, stunned a global audience when when she was announced as world most bearded woman, thereby making in into the book of Guinness World Records for 2017. 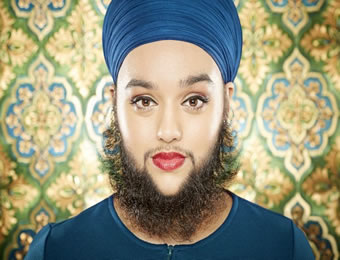 Kaur, who is a body-image activist and runway model reacting to her award said: “I am super proud to hold this record, the inner child in me is so pleased. I grew up reading this book, I even tried breaking some of my own records wanting to be in this book,” Kaur, 24, wrote on Instagram Thursday. Rather than remove her facial hair — the result of a hormonal condition called polycystic ovarian syndrome, for which September happens to be awareness month — the British challenger of beauty norms has chosen to nurture her whiskers.

“It is amazing to be valued and celebrated being a Bearded Lady. I am proud to hold this amazing record,” she continued. “I hope those who read or see my record can take away positivity, inspiration and realise that no matter who you are or what you look like, you are officially amazing!” 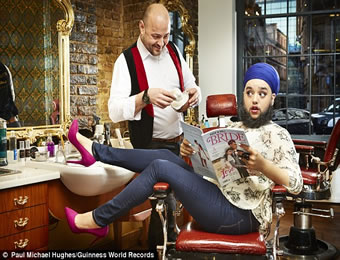 Yahoo News had reported that Kaur joins other beauty-themed record breakers this year, including Tyler Wright, who has what’s been deemed to be the largest afro (10 inches high and 9 inches wide); a group of 261 people in Milan who were recognized for the category Most People Wearing Their Hair in a Beehive; and Charlotte Guttenberg, 67, and her partner, Charles “Chuck” Helmke, both of Florida, for Most Tattooed Senior Citizens. Their bodies are covered with tats 91.5 percent and 93.75 percent, respectively.

Guinness has named Kaur the youngest female with a full beard. She began growing facial hair at age 11, and spent much of her adolescence dealing with shame, bullies, and efforts at hair removal. But at age 16, she made the decision to accept all of herself and embrace her beard.

Kaur’s confidence paid off, as last year she became the first woman to walk a major runway with a full beard, working the catwalk for jewelry designer Marianna Harutunian as part of Royal Fashion Day. Previously, she signed on to be a rep for model Tess Holliday’s social media campaign #EffYourBeautyStandards, spreading the love-yourself message to all.

The activist’s induction to Guinness has delighted Kaur’s many supporters. “I love that there was a record to break!” wrote one of her more than 61,000 Instagram followers. “Not because others have gone through the pain you have, but because it’s amazing to see ‘different’ celebrated and honoured. Congratulations!”

Woman chops off cheating husband’s penis, kills herself with pesticide