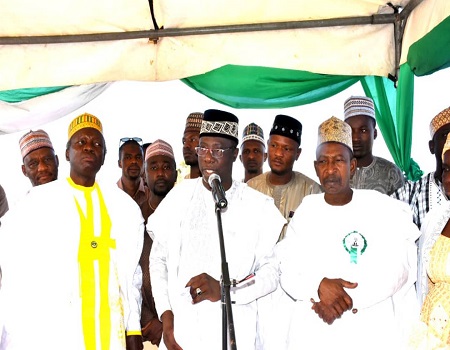 It has been disclosed that transactions worth over N100 million took place within the two weeks of the 1st Bauchi National Trade and Exhibition Fair with the participation of over 200 exhibitors just as the State Governor, Sen. Bala Mohammed Abdulkadir has officially declared the fair closed on Sunday.

The disclosure was made by the Bauchi State Commissioner for Commerce and Industry, Alhaji Mohammed Sadiq at the closing ceremony of the Trade and Exhibition Fair held at the IBB Square, Bauchi.

An elated Mohammed Sadiq said that with this development, both local and national business communities are assured that the administration of Governor Bala Abdulkadir Mohammed will provide a more secure business environment and commit more to these ideals in the interest of economic development of the state.

He also said that the state government will continue to collaborate with private partners to provide physical infrastructures for existing investments to thrive in order to make every part of the state attractive to new investors.

According to him, the fair had provided an excellent opportunity to assess opinions from customers, determining market potentials, conducting research and evaluating competition as well as developing commercial structures by initiating a joint ventures and project partnerships.

” I congratulate the Executive Council of Bauchi Chamber of Commerce, Industry, Mines & Agriculture (BACCIMA) and United Global Services for undertaking this laudable initiative to gather experts, captains of industries, business community and players in the economic sectors; inside the Ibrahim Badamasi Babangida Square to share business ideas and promote business relationship”, he added.

The Commissioner also said that “the Bauchi State 1st National Trade & Exhibition Fair play important roles in marketing as well as business networking as the participants have met with people and companies at their own level in the supply chain, as well as potential suppliers and buyers.”

The Commissioner believed that the trade and exhibition fair will, however, generate new ideas, innovations, and strategies that geared towards addressing the challenges facing Micro, Small & Medium Enterprises so as to engender economic growth and development in the country.

He noted that the theme of the fair which was, ‘The National Economic Recovery and Growth Plan and eventual diversification of Nigeria’s Economy, the Role of MSME’s’ is relevant to the country’s current economic realities as Small and Medium Enterprises contributed significantly not only to the economy but can also serve as an impetus for economic diversification.

He concluded that “let me also use this opportunity to encourage stakeholders here to present today; to take advantage of the fair, we in Bauchi are ready for business and the market is expansive for quicker and bigger returns on investment.”

While declaring the 1st Bauchi National Trade and Exhibition Fair closed, the State Governor, Sen Bala Abdulkadir Mohammed said that the theme of the fair has underscored the need for the government to pay more attention to the growth and development of Micro, Small, and Medium Enterprises.

The Governor said, “the fair has fostered and become an important business exhibition in Nigeria because Bauchi State is the land of opportunities; a place that is home to all tribes and creeds. Indeed, small entrepreneurs have benefited immensely from the ideals of the fair and exhibition.”

Bala Mohammed who was represented by the Commissioner for Local Government and Chieftaincy Affairs, Abdulrazak Nuhu Zaki, said that already, his administration has so far, demonstrated genuine commitment towards transforming business activities in the state.

I was not elected to fight executive ― Gbajabiamila