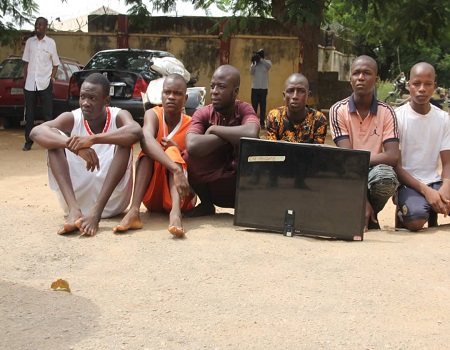 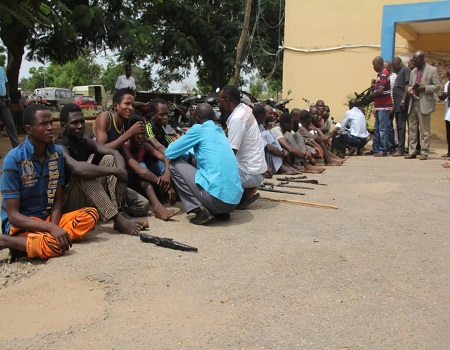 IN its continuous effort in the fight against crime and criminality in the state, Bauchi State Police Command has arrested a number of suspected criminals for alleged various criminal activities which included armed robbery and other crimes committed across the state.

The Command under the leadership of Commissioner of Police, Sanusi N. Lemu has following an intelligence report, received on the activities of notorious armed robbery syndicate that have been terrorizing innocent members of the public, on 24/9/2018 at about 1800hrs, arrested, 25 years old Aliyu Yusuf aka ‘Galanti’ of Kobi street, 18 years old Adamu Mohammed aka ‘Essein’ of Kofar Dumi, 18 years old Bilal Aliyu aka ‘Tsagera’ of Tudun Yerima, 18 years old Isma’il Haruna aka ‘Iluwa’ of Dutsen Tanshi, 20 years old Mansir Mu’azu of Dutsen Tanshi and 21 years old Adamu Mohammed aka ‘Jagwalet’ of Kandahar all in Bauchi metropolis in connection with series of armed robbery cases within the metropolis:

A press statement signed and issued by the PPRO, DSP Kamal Datti Abubakar contained that the above mentioned suspects on 29/7/2018 at about 0130hrs, criminally conspired among themselves while armed with machetes and sticks and stormed the residence of Abdullahi Garba and Okafor Bright both of Federal Low Cost ward, Bauchi and robbed them of One Haojue motorcycle Valued N100,000:00, Two Tecno handsets valued at N13,500:00, Three plasma television sets valued at N200,000:00, Two HP laptops valued at N96,000:00, One Microwave Valued at N35,000 and Six different Handsets valued at N200,000 and escaped to unknown destinations with the items.

The statement further contained that when they were arrested, the exhibits recovered from the suspects include Tecno T472 Handset, 42 Inches LG Plasma Television and One Haojue Motorcycle.

The suspects on 6/10/2018 at about 0030hrs according to the Police Spokesman criminally conspired, armed themselves with locally made pistol and sticks and stormed the residence of one Muhammadu Gidado of Ganma village, Shira LGA and robbed him of cash to the sum of N60,000:00 and escaped.

Similarly, on 16/10/2018 about 0130hrs the same group of suspects in a similar style stormed the residence of one Alhaji Muhammadu Sani aka ‘Dandayo’ of Chakwati Sabuwa Shira LGA and robbed him of cash to the sum of N4,575, “During interrogations, all the suspects confessed to the crimes”, the statement added.

According to the PPRO, exhibits recovered from the suspects include, One (1) Locally made pistol and Cash to the sum of N 4,575.

In the same vein, on 21/10/2018 at about 2015hrs one Ibrahim Ali of Karofin Madaki area, Bauchi a commercial motorcyclist reported at the Tafawa Balewa Housing Estate Police Division that on the same date at about 1930hrs, while conveying two passengers namely, Shamsuddeen Umar and his friend Ibrahim Mohammed both of Gwangwangwan area of Bauchi to Government Comprehensive Secondary School football pitch along Fadaman Mada road, on reaching the School, the passengers brought out a knife and stabbed him on his chest and shoulder and attempted to snatch his Boxer motorcycle.

The cyclist shouted and one of the suspects Shamsuddeen Umar was arrested who during investigations voluntarily confessed to the crime.

Also following a report received from one Baba Sadiq of Madina querters, Bauchi that on 17/08/2018 at about 0300hrs, unknown persons stole his motor vehicle, white Toyota Corolla, with Reg. no. BAU-241-HB valued N2, 000,000.00k, discreet investigations by the Command operatives led to the arrest of 44 years old Abdulkareem Musa and 40 years old Abdullahi Saleh 40yrs as the suspects while the stolen vehicle was also recovered in Jos, Plateau state.

Further investigations, however, led to the recovery of one black Honda Civic vehicle with registration no. BAU-556-EKY.