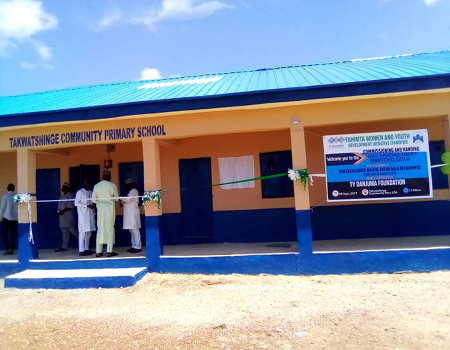 A Bauchi based Non-Governmental Organization (NGO) known as ‘Fahimta Women and Youth Development Initiative’ (FAWOYDI) with support from the T.Y Danjuma Foundation has built a community primary school in Takwatshinge village of Dass local government area of the state in an effort to boost primary education in the community.

While speaking on Monday during the official commissioning and handing over of the school to the community, the Executive Director of FAWOYDI, Hajiya Maryam Garba explained that the gesture is in line with her organization’s objective to increase access to quality basic education in the state asking the government to complement the effort by building toilet and providing water facilities in the school.

Also speaking, the representative of the T.Y Danjuma Foundation, Mr Tessay Akunla said that the Foundation was established in 2009 and is currently working in 32 states of the Federation.

He also stated that the Foundation in 2010 constructed community schools in Fulataran and Kaisuwa villages of Darazo and Gamawa local governments of the state tasking the community to maintain the school and make good use of it thanking the government for deploying teachers to it.

She added that the project will promote the development of the children of the community asking community members to take ownership and good care of the project for the benefits of their wards.

While Responding on behalf of the community, the Emir of Dass Alhaji Usman Bilyaminu Othman, lauded T.Y Danjuma Foundation and FAWOYDI for the gesture promising that the emirate will supervise the construction of well in the school as a source of water pending when the government provides water taps.

It was gathered that before the intervention by the two organizations, the community lacked a single school as pupils had to trek to Dass town to attend schools.

Nigeria@59: We are better together as a nation ― APC