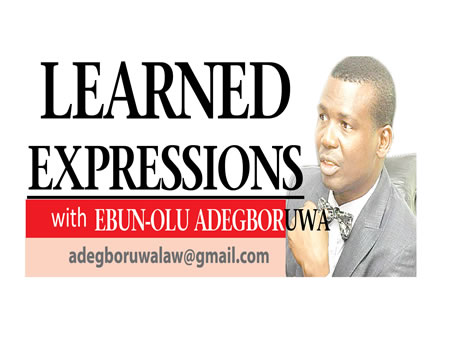 EVEN before reading through this piece, I verily believe that you have a faint idea of what the title is conveying, namely that banking business in Nigeria has become a pain for the majority of our people. And this should not be so at all if the relevant authorities wake up to assert their regulatory obligations under the law.

Most times when you hear that certain number of Nigerians have ruined the banks or are owing the banks trillions of naira, you may need to dig in properly, only to discover that it is all a case of the victim and the villain.

From my own personal experience and the cases that I have handled, I do believe that banks in Nigeria are having

a field day feasting on their customers. I’ve seen and handled cases where great dreams, robust projects and laudable visions have been shattered and eclipsed by banks, in the name of loans or other facilities.

The general trend is that banks in Nigeria do not exist for genuine financing of businesses but rather have developed the uncanny habit of lying in wait and setting traps for their hapless customers, by which they turn them to perpetual debtors and financial captives.

No matter the nature of the project or the true intention and desire of the customer, something will always go wrong somewhere, to turn the story against him, in favour of the bank.  The management of the bank may change, the interests on the loan will climb, the facility may be recalled before its due date, or just something may have happened that makes it practically impossible for the customer to meet up with his obligations under the loan and before you know it, a friendly transaction of an overdraft facility of N5 million only (that word ONLY!), has ballooned into billions of naira, which even the initial collateral of a whole house could no longer payback. That is the story of most loans in Nigeria.

What the banks do is very simple.

They have watched and noticed that a customer’s inflow over the years has become very stable, so they then set up a simple trap, by calling the customer for a meeting, suggesting various ways of enlarging his business through credit facilities.  Then they talk about the total “package,” all of which the customer does not understand in most cases, save to just walk up to the bank to sign some ‘papers’, which the banks then call documentation. Unknown to the customer, however, these are strongly worded agreements, cleverly prepared by in-house lawyers of the bank duly supervised by their external solicitors, by which they have totally tied the hands, legs and even closed the eyes of the customer, even to his generations yet unborn.

The customer would never have suspected anything at all, until the day he wakes up to meet auctioneers in front of his house, with a court order, lorry loads of armed policemen, court bailiffs and an empty truck, to pack all his belongings, to chase him out of the house, to change the locks and keys to the house and send him to his early retirement or, in some cases, his early grave.

I don’t want to give examples because of the people involved but the truth is that many have been rendered homeless,  some battling varying health conditions of stroke, high blood pressure and others plain suicide, as a result of loans from the banks.

The “packages” most times include arbitrary charges, management fees, legal fees, consultancy fees and such other hidden charges that make it practically impossible for the customer to pay back the loan. In the case of some other banks, the relevant officers of the bank who were instrumental to packaging these facilities impose impossible conditions that would force the customer to share part of the facilities with them in order to be able to draw down on it. It is that bad.

The charges have no end, they come in different patterns and they have no limits, so long as the collateral is involved, until the collateral is ultimately liquidated. Allegedly to avoid more charges, the customer is discouraged from engaging his own lawyer, so he would have to pay one per cent administrative charges to the bank upfront, also to be deducted from the loan, as part of the condition for drawdown.

And on top of it, the customer has to settle the bank officials that packaged the loan. So, by the time the money eventually gets to him, half of it is gone and the balance is hardly enough to tackle the project. This is just for a

loan, but there are other charges, from the banks, such as up-stamping, mortgage registration, land documentation, Corporate Affairs Commission’s searches and registrations, etc, the summary of which is that the customer is ever going to have to be asking for more loan, the bank will keep up its game of documentation and sundry charges, giving birth to more loans and more loans, encouraging the customer to just endure and take more loans and more loans, until it gets out of out of hands.

You walk into the bank or the bank walks into your office to open an account. The account opening package is deliberately drafted in such a way that you would need prayers to fill them. The terms and conditions of the relationship are so lengthy and boring that you’re just left with no option than to accept them the way they are.

Meanwhile, you do not get any debit alert of Cost of Transaction (COT) charges, usually very outrageous, but normally concealed. Pray, what other transaction did you open the account for, if not to cover all your financial dealings? And why the duplicitous charges?

I opened an account with a bank with some thousands of naira. I decided to keep the money for some time just so to be able to have it again at any time. In the months to follow, I was hit with charges upon charges, even when I did not operate the account to withdraw from it. As of today, the account is virtually empty and drained, through heavy monthly maintenance charges and other sundry other deductions.

I have left the account intact, waiting for the day the entire money would finish and then proceed to serve the bank court notice for all the fraudulent deductions. For well over three or four years now, that bank account has not been rendered dormant for the purpose of their monthly deductions, but if you have anything urgent to use the account for, you’ll be told to go and activate it, meanwhile the monthly deductions are automatic in favour of the bank, even when it is said to be inactive.

Now we are told not to carry cash but to patronise ATMs and POS. In most cases, the ATMS have been programmed to only pay maximum N10,000 per transaction, which is only a clever way of duplicating the charges in order to draw more money from the customer.

Most POS are programmed to decline transactions, debit your account and then force you to still go and look for cash anyhow, in order to trade. Then you are told to go to your bank to document a N5,000 transaction or wait for automatic reversal, which in some cases never comes.

I have lost a lot of money in this process as when I weigh the cost of going to the bank, the time to be wasted and what I stand to lose thereby, I just allow the bank to walk away with the money, at times, running into thousands of naira. And you can very well imagine that this goes on in all the banks, whereby on a daily basis, customers are being fleeced of their hard-earned resources by these smart banks.

I have read the Banks and Other Financial Institutions Act and also the Central Bank of Nigeria Act and I verily believe that the CBN has only let the banks loose on their hapless customers and getting away with all manner of fraudulent activities.

The stories are so mind-boggling, of cases of unauthorised withdrawals from the accounts of customers, of insider trading, round trips and such other financial fraud that go unpunished. The banks are in custody of the account and the money, deploying technology against their customers and smiling away whilst the customer is in sorrow and penury.

It is ungodly and so very unfair that the CBN has for so long allowed this monster to fester. No banking licence should be allowed to thrive upon any proven case of fraud. None at all. In the same way that customers have been sent to their early graves, in the same way, that businessmen and women have been led to commit suicide on account of very strange and inexplicable liquidations, so also should no bank be allowed to trade or survive on fraud and mischief.

The existing laws in Nigeria require the CBN to act to protect bank customers. And the National Assembly must rise to these occasions urgently. Just as we now have AMCON to protect only the banks, there should be an agency created by law to protect innocent bank customers from shylock banks. This is why businesses are not thriving in Nigeria, this is why the factories are collapsing, due to arbitrary interest rates and unfriendly bank charges. I can go on and on.

The bank is an institution, some have been in existence for years, declaring bogus profit at the expense of their customers. Why should any institution grant a one-year loan at the excessive interest rate of 24 per cent and still expect the customer to pay it back in one year? What kind of business will such a person execute in a country where there is no infrastructure to support businesses and enterprises, where the entire profit is consumed by generators and diesel?

This should not continue and I urge all relevant authorities to intervene urgently, to save our people.

Ondo town gets medical benefits, others from foundation

Restructuring: Lifeline for a faltering republic (1)