Entertainment
By Adam Mosadioluwa On Nov 22, 2022 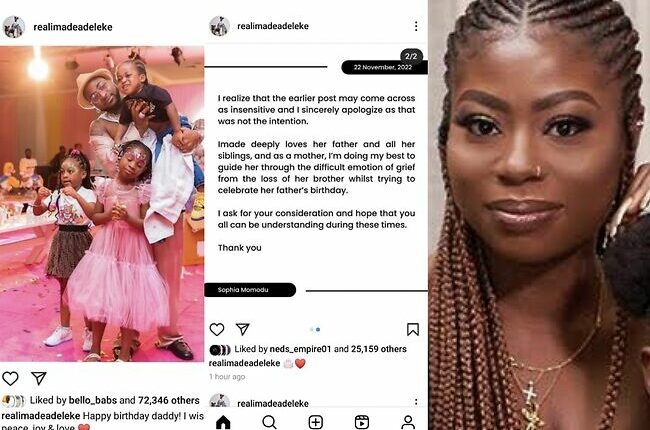 The mother of Davido’s first child, Sophia Momodu, has tendered an apology to the public and fans of the singer after she was criticised over a birthday post she made on behalf of her daughter, Imade Adeleke, which went viral on Monday.

To celebrate Davido’s 30th birthday, Sophia Momodu, who manages her daughter’s Instagram account took to the little girl’s Instagram page to send a message to Davido and accompanied the post with a picture of the singer with his children, Imade, Hailey and Ifeanyi Adeleke.

The choice of the picture, however, did not go down well with some social media users, who took to Twitter and other platforms to heavily criticise her.

According to the critics, they condemned Sophia for using the picture that featured Davido’s three-year-old son, Ifeanyi Adeleke, who tragically passed away on October 31.

Some of the critics described the post as “adding salt to injury,” adding that it would be difficult for Davido and his fiancee, Chioma, to bounce back from the loss if they continue to see such a post.

Reacting to the criticism in a statement released by Sophia via her daughter’s Instagram account on Tuesday, the mother of Davido’s first child apologised for the post and stated that it was not her intention to be insensitive.

She added that she was only trying to “guide her daughter” through the tragedy of losing her younger brother.

She wrote, “I realise that the earlier post may come across as insensitive and I sincerely apologise, as that was not the intention.

“Imade deeply loves her father and all her siblings, and as a mother, I’m doing my best to guide her through the difficult emotion of grief from the loss of her brother whilst trying to celebrate her father’s birthday.

“I ask for your consideration and hope that you all can be understanding during these times. Thank you.”

Despite being off social media for the past few weeks, Davido was widely celebrated on Monday by celebrities, politicians and fans who took to their respective social media pages to pour encomium on the singer who clocked 30 on November, 21, 2022.