As Amotekun goes into the law books 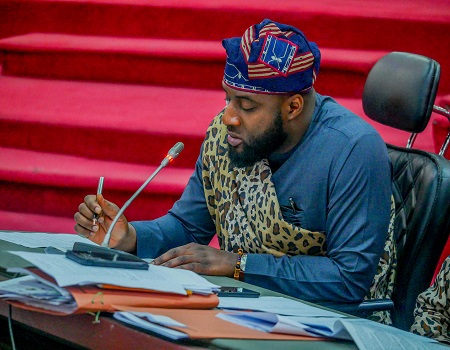 THIS week, after an interlude of rabble-rousing and opposition by apologists of Nigeria’s iniquitous status quo,  the legislatures of the six states in the South-West geopolitical zone passed the bills legalising the Western Nigeria Security Network (WNSN), codenamed Operation Amotekun, into law. The Ogun House of Assembly passed the state’s Security Network Agency and Amotekun Corps Bill barely 19 days after receiving the piece of legislation from the executive arm of government. The bill entitled ‘HB No. 35/OG/2020- ‘A Bill for a law to establish the Ogun State Security Network Agency and Amotekun Corps to Assist in Maintaining Law and Order in the State and Connected Purposes’ was passed during a plenary presided over by the speaker, Olakunle Oluomo. In the same vein, the Oyo State House of Assembly passed the state Security Network Agency Bill, otherwise known as Amotekun Corps, into law at a colourful plenary where members, the Clerk of the House and other staff turned out in attires symbolising the Amotekun spirit. The bill was passed after the third reading at a plenary presided over by Speaker Adebo Ogundoyin. In the same vein, the Osun State House of Assembly passed the South-West Security Network and Amotekun Corps Bill 2020 into law, with the Speaker, Timothy Owoeye, indicating that the grey areas had been addressed.

On its part, the Ondo State House of Assembly passed the bill to establish the State Security Network Agency and Amotekun Corps into law, assuring that it would help to protect the lives and properties of the people in the state. This was shortly after the Clerk of the House, Mr. Bode Adeyelu, presented the bill for third reading. Similarly, the Lagos State House of Assembly unanimously passed the bill on Amotekun into law after the third reading. Earlier in February, the Ekiti State House of Assembly had blazed the trail by passing into law the Ekiti State Security Network Agency, codenamed Amotekun bill. The draft bill transmitted by Governor Kayode Fayemi to the assembly passed through extensive deliberations.

To say the least, Amotekun, a security outfit founded by the six state governors through the Development Agenda for Western Nigeria Commission (DAWN) on January 9 in Ibadan, Oyo State, as the first security outfit initiated by a geopolitical zone in the country to curb insecurity, is a timely response to the security threats in the zone. Its operatives are to complement the police, other security agencies and traditional rulers in combating terrorism, banditry, armed robbery and kidnapping, while also helping to address nomadic herdsmen’s onslaughts on farmers and other citizens in the region. In this regard, there is no better time than now to ensure that only the best available human resources are absorbed by the corps. Amotekun operatives must be physically and mentally fit, disciplined and law-abiding. Indeed, appalled by the continuing criminal actions of members of the security agencies in the country, including harassment, brutality, torture and unwarranted incarceration and killings of Nigerians, the Ekiti State brannch of the Nigerian Bar Association (NBA) has suggested compulsory psychiatric test for the operatives, adding that such a move would inject sanity into their conduct and operations. This is, in our view, a noble suggestion.

As security issues change form and template with time, it is expected that the leadership of the Amotekun corps will be forward-looking, receptive to new ideas, courageous and fully committed to performing its constitutional mandate. In the same vein, issues of appointment, promotion and remuneration must be handled properly so that the operatives can perform to their optimal capacity. In addition, the operatives must at all times be given all the necessary tools, including sophisticated ammunition, communications equipment and vehicles, to tame insecurity in the region. They must, in line with the law setting them up, be confined to security issues and must be fit for purpose at all times. They must map out all the deadly blackspots all over the region and contain the threats therein. In doing so, they will necessarily face challenges, but they must not dither or waver.

The time indeed has come to practise federalism in word and deed. Countries such as the United States have county, city, state, campus and park police formations, and even private police. The fact is well known that policing in the United States, a country of about 327 million people, is conducted by around 18,000 federal, state, local and city departments, each with its own rules and nomenclature, with powers, responsibilities and funding varying from state to state. Highway patrol is a state police duty. A country like Nigeria with an estimated 200 million people cannot be realistically policed by a single federal outfit. The time has come to shelve the uninformed and reductionist perception of policing that guides the operations of the Nigeria Police Force. The time has come for state police, by whatever name called, to take root in the country.

Coronavirus: Religious leaders have a duty to do —Noibi, Olanrewaju