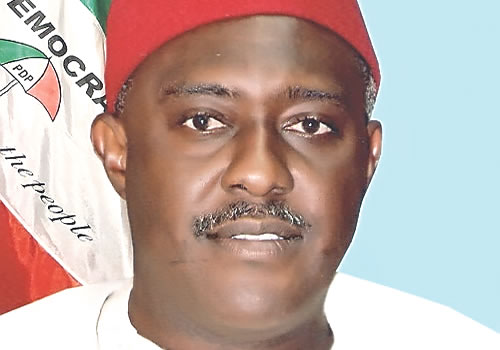 Former National Publicity Secretary of the Peoples Democratic Party (PDP), Chief Olisah Metuh on Friday failed in his bid to stop his trial on fraud and money laundering charges preferred against him as the Supreme Court ordered Justice Okon Abang of the Federal High Court in Abuja to continue in the hearing of the matter.

A five-man panel of Justices of the apex court made the order in a unanimous ruling in which it dismissed Metuh’s application for an order of stay of proceedings of his trial before the trial court.

With the decision of the apex court yesterday, Metuh’s trial will now continue on June 19, 2017, being the date slated to deliver rulings on some interlocutory applications in the trial by the Justice Abang, who is handling the matter at the trial court.

Abang had earlier adjourned till June 19, 2017 to await the outcome of the Supreme Court’s decisions on the appeal by the former PDP spokesman, which was delivered on Thursday.

Metuh’s application which was dismissed by the Supreme Court was anchored on his pending appeal before the court.

The former PDP’s spokesman’s appeal before the apex court is challenging an earlier ruling of the Court of Appeal which affirmed Justice Abang’s decision dismissing the no-case submission he filed before the Federal High Court.

Metuh had, in his application for stay of proceedings, urged the Supreme Court to halt his trial before the Federal High Court pending the outcome of his appeal before the apex court on the no-case submission.

But the five-member panel Justices of the Supreme Court dismissed the application on Friday in a lead ruling prepared by Justice Clara Ogunbiyi.

The summary of the ruling was, on Friday, read on behalf of Justice Ogunbiyi by Justice Ejembi Eko, who also agreed with the lead decision of the apex court.

Recalled that Justice Abang had, in February turned down Metuh’s request for the release of his international passport to enable him travel abroad for spinal cord surgery.

The Judge also turned down Metuh’s request to summon the former National Security Adviser (NSA), Col Mohammed Sambo Dasuki (rtd) by way of a subpoena to testify for him as witness in his trial.

While dismissing the former PDP spokesman application to Dasuki for lacking in merit and substance, Abang held that the former NSA was not a compellable witness in the trial.

Having gone through the processes before the court, Justice Abang held that there was nothing before the court to show that the defendant had made any effort to reach the authorities keeping Dasuki and it was rejected.

“It is not the duty of the court to compel anyone to come and give evidence when that person is not a compellable witness. The name of Dasuki was not included in the list of witnesses filed by the defendant.

“The application is made in bad faith and with the intention to delay the trial. The application to issue a subpoena will not serve any purpose. The law is no respecter of persons. This application is lacking in merit and is hereby dismissed”, the court held.

After that, Metuh in March, approached the Federal High Court in with an application seeking an adjournment in his trial to June 20, 2017 or any date after June 9 to await the outcome of his appeal pending before the Supreme Court.

Metuh’s application was however, opposed by the prosecution counsel, Sylvanus Tahir, who urged the court to discountenance the arguments of the defence because proceedings in criminal trials are no longer stayed since the Administration of Criminal Justice Act (ACJA) came into effect.

Justice Abang, after entertaining arguments on the application, fixed June 19, 2017 to rule on Metuh’s application seeking an adjournment in his trial to June 20, 2017 or any date after June 9 to await the outcome of his appeal pending before the Supreme Court.

Metuh, who is standing trial along with Destra Investment Limited for allegedly receiving the sum of N400 million from the former National Security Adviser (NSA), Col Mohammed Sambo Dasuki (rtd) and using same for political activities of the PDP in the 2015 general elections, wants the court to suspend his trial pending the hearing and determination of his appeal at the Supreme Court on his no-case submission.

He had filed an application at the Supreme Court, challenging the decisions of the trial and the Appeal Courts, both of which had dismissed his no-case submission.