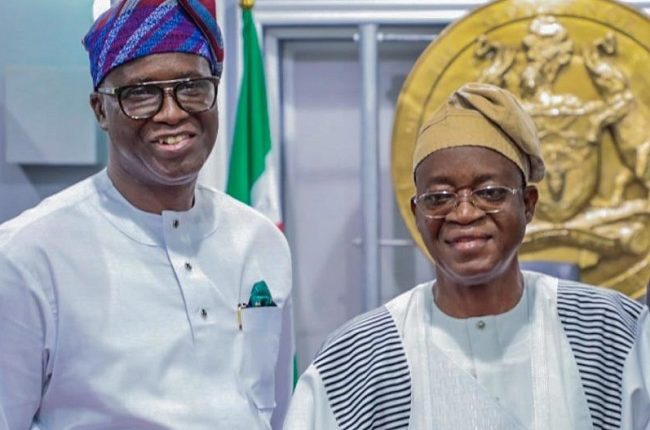 Leaders and members of the All Progressives Congress, (APC) in Osun West Senatorial District have endorsed the state governor, Adegboyega Oyetola and his deputy, Benedict Alabi for the second term in office.

The leadership of the party in the zone who converged at the D.C Primary School, Iwo where the endorsement exercise took place yesterday, said they took the decision because of the outstanding performances of the governor since he became the governor of the state.

They, however, unanimously agreed to work for his reelection in 2022 affirming that, he deserves another time to complete his laudable programmes for the people of the state.

Speaking at the programme, a chieftain of the party and Asiwayu of Iwoland, Barrister Gbadegesin Adedeji, described the governor achievements in the state as impeccable saying If given more opportunity, he would deliver more dividends of democracy to the people of the state.

Also speaking, the State Party Chairman, Prince Adegboyega Famodun, said “the gathering in Iwo was a testament to the massive support Governor Oyetola enjoys among the people of Osun West. He also commended the party faithful for canvassing support for the governor’s re-election.”

Responding, the State’s Deputy Governor, Mr Benedict Alabi, thanked the people for rallying support for the governor’s re-election and expressed optimism that the APC would retain power in 2022.

He said the administration of Governor Oyetola had performed creditably well and deserves another term.

“We thank party members for gathering here today to show support for the re-election of Mr Governor. Without doubt, our Administration has done well and we have fulfilled many of our campaign promises to the people of Osun. I, therefore, urge you all to continue to mobilise support for our party and Governor Oyetola’s candidacy ahead of the 2022 governorship election.

“In Osun West, the government has embarked on a number of developmental projects, including rehabilitation of health facilities and roads. We also facilitated the siting of Federal College of Education in Iwo.

Tribune Online analysis also shows that the new confirmed cases are slightly higher than those recorded the previous week (October 25 – 31) where the country recorded 923 cases.APC leaders in Osun

Democratic candidate, Joe Biden has been elected President of the United States of America.APC leaders in Osun

Kamala Harris made history on Saturday with her election as Joe Biden’s vice president, becoming the first woman, first Black American and first Asian American to win the second-highest US office.APC leaders in Osun