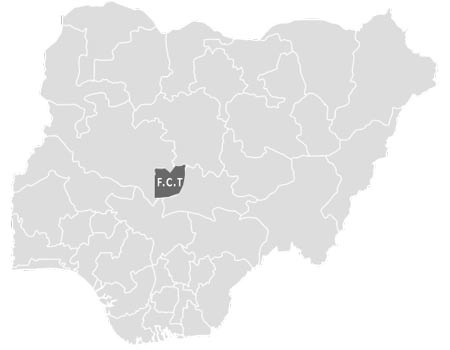 Chairman, Human Rights Commission, Chidi Odinkalu, on Monday, said “nothing is bigger than trying to rescue our country.”

He stated this at a peaceful protest held in Abuja on the state of the nation.

The protest, which kicked off from the popular Unity Fountain amid heavy security presence, had in attendance market women, youths, adults and pro-government civil society groups.

According to Odinkalu: “Nothing is bigger than trying to rescue our country. We are trying to make sure that Nigeria works for everybody. We came here as poor ordinary Nigerians armed with our national plan.

“They (police) have been sent here to do what they don’t want to do, we know they are part of us.

“If they had food on their tables, they won’t allow themselves to be rented. We are here because the country can be better.”

Convener of the BringBackOurGirls (BBOG) movement, Aisha Yesufu, who joined in the protest, said the group would not relent in pressing home their demands.

She noted that Nigerians were tired of the poor power generation, increasing youth restiveness as a result of unemployment and the present corruption bedeviling the country.

According to her, “in this fight to make Nigeria better, no retreat, no surrender. I am tired of being told that tomorrow will be better, As far as I am concerned, I don’t have a tomorrow, what I have is today.

“I did not come to this country as an escort; I am tired of the child of the poor being treated as a nobody, I am tired of being important when it comes to election; I am tired of getting home and staying without electricity.”

In his response, convener of the Buhari Volunteer Network, Olayemi Success, who countered the anti-government group, said the group had planned its protest before the #IStandWithNigeria group, stating that it was not a counter group.

“There is need to educate ourselves, there is need to get the truth said. This is not a response to the proposed protests and neither is it a counter to theirs. They have their right just as we.

“We had prepared for this since the second week of January. Theirs is just a response to ours,” he said.

Speaking further, he stressed the need for Nigerians to be reasonable in their judgment of the the government, saying: “There is no need for Nigerians to frustrate President Muhammadu Buhari, because when a system is corrupt, you have to format it before it boots – nothing will work at that point and that is where Nigeria is at this point.”

Success, who blamed the country’s woes on corruption, said: “Corruption has eaten deep, there is need to format it and that is what President Buhari is doing. We are aware of the increment of market prices. We are aware of that – rice has increased from N8,000 to N20,000.

“People who are supposed to understand are not, that is the fight back of corruption. If President Buhari fails, integrity will die in Nigeria.”

Another pro-government protest organised by the Coalition for Good Governance and Change Initiative threw its weight behind the present administration.

Addressing newsmen during the protest, convener of the group, Okpokwu Ogenyi, noted that some of the campaign promises made by the government were being implemented, part of which he said included the N5000 monthly stipend for vulnerable Nigerians and the N-power project.

On security, the coalition said the Nigerian troops had recorded achievement in restoring peace to the North-East and capturing Sambisa Forest which had been a major hideout for terrorists.

“As Nigerians, we chose to analyse government policies and found out that the lost glory of Nigeria is returning with a full force. Yes, the Nigeria of today has built capacity for our military, the once dreaded Boko Haram has been defeated. Camp Zero in Sambisa has been captured. This was where all the evil plots against our state was once coordinated.

“We are happy that unlike in the past when they brought the battle to Abuja and we were running away like cowards, the story has changed today as our gallant military has suffocated and sniffed every oxygen out of them.

“Under this administration, we have a health intervention programme where the Federal Government engaged professionals on special cases of health challenges, carrying out operations that many have no money to undergo, the government did it free. Is this not change?

“The social investment programme of Mr President is working. The school feeding project has commenced and being extended to states.

“While some complain of hunger, President Buhari has commenced payment of N5000 monthly stipends to vulnerable Nigerians, taking care of the extreme poor in the society, a promise fulfilled. We are here to appreciate the president and to behave like Oliver Twist that we want N10,000 by next year and we know he is going to do that for us.

“Today, the Buhari-led administration is fixing young graduates with employers, they are also getting N30,000 monthly stipends while getting work experience through the N-Power Programme. We all know that SURE-P yesterday was for them and their drivers. We had a situation where even ministers and governors under the past administration disguised themselves as vulnerable and underprivileged persons because of corruption. This case has changed because of President Buhari’s stands against corruption,” he said.

However, the protesting groups were stopped by security operatives at the entrance to the Aso Villa, Abuja.

New cases of FGM reported every hour in UK