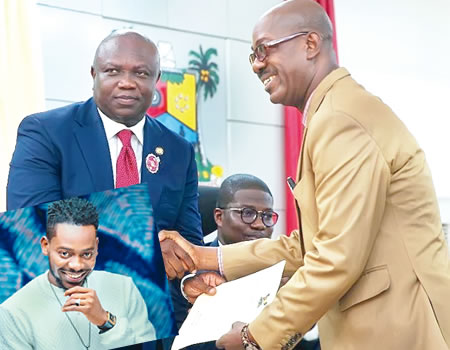 It is obvious that popular singer, Adekunle Gold is a prodigy and is ecstatic over the landmark achievement of his father in the academic profession, a development he described as a dream come true for his father and himself.

The Ire crooner, who could not hide his joy over the new appointment of his father as the Tutor General/Permanent Secretary for Education in Lagos State, mesmerised the social media with a mind-blowing love letter to his father, detailing his life and time, as well as struggles and determination to reach the peak of his career against all odds.

The letter entitled: I Cried Today beamed light on the philosophy, dreams, legacy, challenges and joy of his father over his successful career.

Excerpts of the letter read: “Growing up, I watched my dad worked so hard for too little. Teachers weren’t big earners. But my dad, with the help of my mum, provided everything all four of us needed-maybe not wanted, but definitely needed.

“I remembered when my dad went to UNIBEN for his first degree. My sister and I very young, and communication with him were pretty much impossible, because it was before the era of cell phones. We only saw him when he had school breaks.  He finished as the best in his class with distinction in Fine Arts, Painting and Graphics Major. He was part of the team that co-wrote the module for teachers at one time. Every day after his primary assignment as a Fine Arts teacher at Keke High School, he would go to the Teachers’ College to teach other teachers.

“He has given so much to himself, and truly values the opportunity to be serving the government and every school he has worked at as teacher, vice-principal or principal. He has won about 30 awards for his selfless service to the state. My dad is a man that refuses to cut corners. He believes in hard work and is known for integrity. He always said to me: ‘Your name is precious; you must protect it.’

Gold, who accompanied his father to receive the appointment, hinted that it had always been his father’s dream to attain the peak of his career, just as he noted that he was delighted to witness his father’s greatest achievement.

“His dream has always been to become a Permanent Secretary of Lagos State. It was also mine for him too. In this moment, this 56 year-old brilliant man’s dream is now a reality. Today, I sat in the audience and I listened as they read out loud, his achievements. I watched as he was sworn in as a Tutor General/Permanent Secretary for Education. So, I cried today, but they were happy tears.”

Obasanjo, Osoba, others are neutral on Ogun guber race —Kawonise