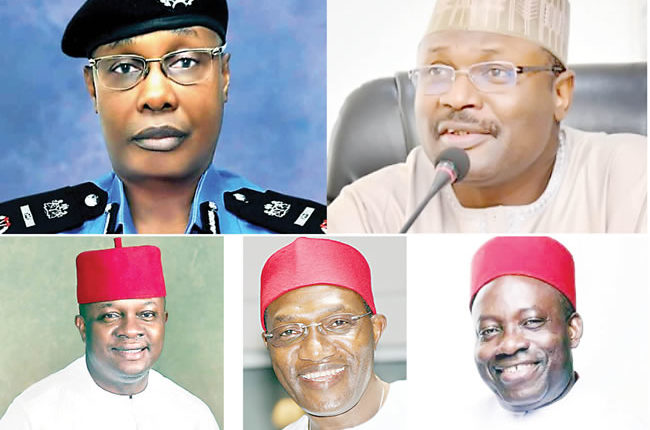 KUNLE ODEREMI writes on the series of threats to the conduct of the November 6 governorship poll and the immediate and far-reaching implications.

Anambra appears to be sitting on the tinder box. With just nine days to the November 6 governorship poll, the state is under siege from criminal elements and state security operatives. Many have been killed and property, including security facilities destroyed in the last few months. A few instances will suffice. About eight other persons were also killed on the same day during the attack at Nkpor, a suburb of Onitsha. On October 3, gunmen attacked in Nnewi, killing two people in the process. The gunmen targeted the Nnamdi Azikiwe Teaching Hospital (NAUTH) in Nnewi, and an office of the State Security Services (SSS). It is recaled htat an apparent reference by the federal authorities on the possibility of declaring a state emergency had sparked angry outbursts. Some said it was a ploy to subvert the will of hte people. The public outcry necessitated the visit of Governor Willie Obiano to the President. And as the election approaches, the cloud of uncertainty is being worsened with threats by the proscribed Independent Peoples of Biafra (IPOB) members to abort the exercise that has declared a five-day passive resistance in the entire South-East in the grand design to truncate the poll. The counter move by the authorities has led to massive assemblage of security personnel and deployment of military hardware to Anambra and contiguous states. As of two weeks ago, the Police high command declared a combined force of close to 40, 000 officers and men to beef up the area ahead of the election.

Campaigns of parties and their candidates for the election have been salutary. Socio-cultural events, coupled with other private programmes became veritable platforms for electioneering in closely monitored and secured community halls in and outside festivals, including the annual ritual to celebrate the arrival of new yam in Igbo land served as fulcrums for horse-trading.  Simulated rallies were relocated and coordinated in distant cities such as Lagos, Abuja, Enugu and Port Harcourt by candidates trying to escape from the tensed atmosphere in Anambra. Yet, more than two millions registered voters are expected to exercise their franchise in Anambra. According to INEC chairman, Professor Mahmood Yakubu, the total number of registered voters in Anambra State is 2,525,471.

Besides, INEC plans to deploy a large number of its staff and ad hoc workers for the election. “Deployment for the election will involve the movement of huge consignments of sensitive and non-sensitive materials to the 21 local government areas of the state, 326 wards or registration areas and 5,720 polling units. That means over 6,000 locations to be protected. If we add that to about 26,000 officials that will be deployed for the election, we begin to appreciate the magnitude of the challenge of securing the Anambra governorship election,” the INEC boss said. The commission had also unveiled its plan to recruit more than 26, 000 ad hoc staff ahead of the poll, who are to deployed to the polling locations

Police personnel are required to on ground to guarantee a conducive atmosphere for eligible citizens to exercise their franchise. The Inspector General of Police (IGP), Usman Baba has said a total of 34,587 officers would be deployed to Anambra for the election. The deployment comprises conventional police officers, police mobile force, the counter-terrorism unit, Special Forces, explosive ordnance unit, force intelligence bureau, INTERPOL, special protection unit, and a medical team. Three helicopters are to provide aerial surveillance while detachments of marine police operatives would also be deployed to ensure a safe, secure, and credible electoral process. “Based on the outcome of the analysis, we have developed a strategic election security operation plan which will involve the mobilisation of 34,587 police personnel,” he said. “Let me use this opportunity to assure all citizens and stakeholders, including the international community of our determination to work with other security agencies to stabilise the prevailing situation in Anambra. The idea is to create a conducive and enabling environment that will guarantee peaceful conduct of the election.

In spite of all these massive security cordon, transporters that constitute an integral part of the chain of stakeholders in elections in the country are apprehensive and circumspect in playing their role to complement INEC in the movement of electoral personnel and materials on the Election Day. Deeply worried by the security situation in Anambra, INEC was the first to raise the alarm about the ominous signs and climate of fears prevalent in the state. According to INEC National Commissioner on Publicity and Voter Education, Mr Festus Okoye, the situation calls for swift actions and collaboration among all stakeholders.

In an interview, he said: “The commission is worried at the escalation of violence and violent activities in Anambra State and the surrounding States. With a few weeks to the Anambra Governorship election the nation should be worried and all lovers of democracy should be worried,” he said recently. “We are worried because the Commission must charter commercial buses to convey the ad-hoc staff to the Registration Area Centers (RAC’s) and the Super Registration Area Centres (Super RAC’s) preparatory to deployment to the polling units. These transporters must convey our materials and personnel to the 326 Registration Areas for the Collation of Results and reverse logistics. With the escalation of violent activities, these transporters may likely withdraw their services or refuse to enter into any contractual agreement with the Commission and this will have adverse effect on deployment of materials and personnel on Election Day. The Commission organizes, undertakes and supervises elections and its primary remit does not cover constitutional and legal responsibility for election security.”

The national chairman of African Democratic Congress (ADC), Chief Ralph Okey-Nwosu is among the critical stakeholder in Anambra politics. He is deeply concerned about the level of insecurity and said the situation was compounded by the unrestrained conduct of a number of other gladiators, especially in the other main political parties. “All the war happened within those parties before and during their primaries and made the outcome of their events toxic. Now the toxicity has gone into the larger field of contestation and the pungency is so corrosive and has consumed about 20 lives in less than one week. There is no other way to explain what is happening in Anambra,” he said not too long ago.

According to some observers, the success or otherwise of Anambra poll has wide implications. One of them is the import on neighboring states and indeed the larger South-East. Two is the role of non-state actors in such a sensitive state matter with intent to torpedo the exercise. Third is that it poses a big poser to the capability of the coercive arms of government to withstand such challenges bordering on their statutory duties. Other analysts contend that the Anambra conundrum is a direct challenge to the status of INEC as a central organ that conducts, organises and supervises national elections in the country. The whole scenario, other observers said, vitiates opposition to calls for restructuring of the country in line with current realities and the principles of federalism.