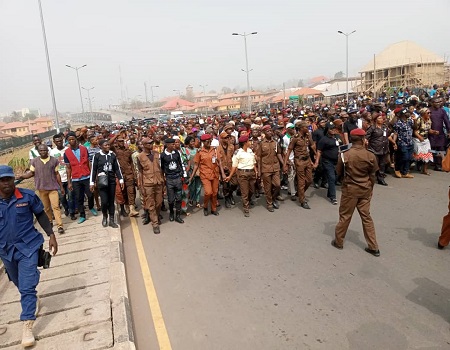 A cleric and key members of hunters as well as members of Oodua People’s Congress (OPC), among other stakeholders were part of the solidarity rally held in Ado-Ekiti, the Ekiti State capital on Tuesday in support of ‘Amotekun’

Also in the rally were members of the National Association of Nigerian Students(NANS), Vigilante Group of Nigeria, Yoruba Koya, Man ‘O War, Oodua Union, Ekiti Council of Elders, Agbekoya Movement and other members of the society.

Tribune Online observed that men of the state police command, operatives of the Department of State Services provided heavy cover for the thousands of protesters, who walked from the popular Fajuyi park through Okesa junction, Ojumose to the popular Erekesan market and Ijigbo area of Ado Ekiti capital city.

It was a general consensus among the stakeholders that the Amotekun initiative has berthed permanently in the south-west region and that it was not formed to fight Fulani herdsmen, except the unruly and destructive ones.

Speaking at the rally, a cleric and coordinator of the peaceful protest, Pastor Praise Ayodele said: “Amotekun has come to stay in south-west Nigeria. We are not fighting anybody. The security of our people is very important. We are to do this to support our governors that we are happy with Amotekun.

“It is sad that our people were being killed and kidnapped and many of this carnage were without arrests. We are daily living in fear of being killed and these and many more are the reasons for the formation of Amotekun.

“On the proscription of Amotekun by the Attorney General and Minister of Justice, Abubakar Malami, we are of the opinion that the Minister only expressed himself as a private citizen who is entitled to his own opinion. We charged our governors to remain focused, we advise our leaders to desist from politicising Amotekun and that our security should be of priority.”

Also, the Senior Special  Assistant to Governor Kayode Fayemi on Internal Security and former Speaker of the Ekiti State House of Assembly, Honourable Dele Olugbemi said: “The Amotekun is for easy identification of all visitors to Ekiti and south-west. It is sad that Malami made pronouncement over an issue he knew nothing about. He spoke as if he didn’t know the level of insecurity in this zone.

“Some of these evildoers besieged even our towns killed the people and destroyed everything on the farm. Amotekun will work in their localities and it is not about fighting anybody.”

Making his contributions, the Coordinator of Oodua Union, Hon Femi Robinson, said the security architecture in the country has collapsed and that local security becomes imperative, saying “If Amotekun disarms armed robbers, are they not helping the police?” he asked.

The leaders of Agbekoya and Vigilante Group of Nigeria, Chief Sunday Omoyajowo and Mrs Suwebat Aliu respectively, said Yoruba maintained a united front  about Amotekun and that nothing would change this stand, adding that “Amotekun won’t render the police useless, because security  is  a function  of everybody, so we appreciate our governors  for this initiative.”

The leader of the delegation of Ekiti Council of Elders, Chief Niyi Ajubulu, regretted that people can no longer move around as a result of increased insecurity in the region.

“We have to be vigilant in this zone. Amotekun has landed and we must cooperate with them. Whoever that is averse to the formation of this outfit is satanic,” Ajubulu said.