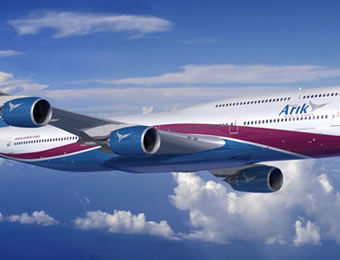 BARELY one month after its takeover by the Asset Management Corporation of Nigeria (AMCON), the international financiers and other creditors of Arik Air have concluded plans to sue the Federal Government anytime from now.

The creditors are putting their resources together for the suit against the Nigerian government for the airline’s failure to honour its international obligations.

The development is coming just as AMCON has scaled down Arik Air operations to less than 30 per cent.

The airline, which at peak periods used to operate 120 flights a day now operates about 15 flights daily with very low load factor.

This has forced Arik to reduce its domestic and regional operations, as it suspended its international service immediately after AMCON took over the airline.

Equally, Nigeria may have lost the lost the West Coast and other African destinations to Asky, AWA and Ivory Coast’s national carrier as Arik has stopped most of its regional flight services on the routes.

Arik was the only Nigerian airline that flew to Dakar, Senegal, Abidjan, Code’Ivoire, Luanda, Angola and Libreville, Gabon. Since it was taken over by AMCON, it has stopped operating to most of these destinations.

Information gathered yesterday disclosed that Arik Air workers who were owed two months’ salaries (December and January) before AMCON took over the management of the company on February 8, 2017 were paid for January salary according to some of the workers who spoke on the condition of anonymity. AMCON said that December salary should be paid by the former management before it took over the company.

Cabin crew whose November flight allowances were supposed to be paid with December basic salary said they have no hope that the money would be paid now that AMCON said the former management should pay them December salary.

“We were actually owed two months’ salary before AMCON took over. I know that the Nigerian Civil Aviation Authority (NCAA) insisted that Arik must pay all of us all outstanding salary by December 31, which the airline did, after the labour strike, so it was December and January that was owed us,” an official of the airline said.

Many of the workers who spoke to newsmen said that even before AMCON took over passengers had lost interest in the airline because of its failure for on time flight services, which got worse before it was taken over.

“AMCON has not been able to restore the passengers’ confidence and because we have scaled down our flights, passengers would rather choose other airlines than come to Arik. Yesterday (February 25), we operated to Benin from Lagos with only 18 passengers going and on the return leg. It is only Port Harcourt service that we still have reasonable number of passengers,” the Arik official said.

Sylva lauds Chevron for role in growth, development of oil and gas sector