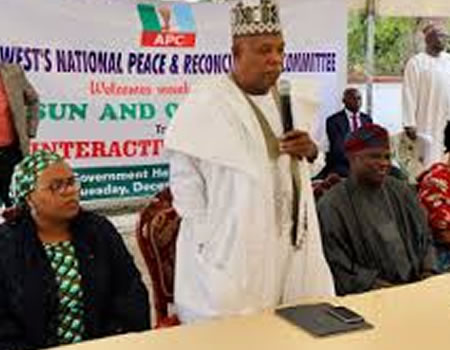 BORNO State governor, Kashim Shettima and his Lagos State counterpart, Mr Akinwunmi Ambode, on Tuesday, met with aggrieved members of the All Progressives Congress (APC) in the South-West over the outcome of the primaries of the party to elect candidates for the 2019 general election.

The two governors, who are members of the national peace and reconciliation committee set up by the APC to pacify aggrieved party members, specifically met with bigwigs, including former deputy governor of Osun State, Senator Iyiola Omisore; a governorship aspirant in Oyo State, Chief Adeniyi Akintola, among others.

Other members of the committee were former deputy governor of Ekiti State, Professor Modupe Adelabu and Mrs Sa’ida Bugaje.

Shettima, who chaired the meeting held at the Government House, Ibadan, described Governor Ambode as the politician of the year for displaying uncommon courage and spirit after the party’s primaries in Lagos, saying that his display of sportsmanship would forever remain a reference point for others to learn and emulate.

The Borno State governor harped on the need to build bridges of understanding in the party, noting that the APC National Working Committee (NWC) understood the importance of every party member in ensuring the success of the party in the 2019 election and was keen on bringing all members on board.

“We listened to our members, we have noted their grievances and we will forward those observations and solutions proffered to the NWC of the party for appropriate action.

“We called on them to exercise patience, show courage and emulate Governor Ambode who is steady, tolerant and accommodating.

“The NWC will take far-reaching decisions to ensure that all party members are brought on board to achieve our dream of winning the 2019 election.

“Everyone is important in this movement and we will not underrate anyone,” Shettima said.

Speaking in the same vein, Ambode stressed the need for all party members to bond as a family and be united in ensuring that the party emerged victorious in the 2019 election.

“There is no amount of wound that can manifest in your heart as being present here that we can permanently heal. But what is important is that we have created a platform for us to be able to start to bond our family, the APC family, together.

ALSO READ:Gbolarumi’s case against PDP, others fixed for January 31

“We are one family. But some of the people seated here have one or two issues to complain about. But we are peacemakers. What is important is that we must bond together and also carry that crusade of making our party to win the 2019 elections together.

“And the 2019 elections will not mark the end of our great party. So, obviously, there will be other things that can come out more fruitful than the competition that you have actually envisaged that you are going to be the winners.

“It is in that same spirit that I will just like you to imbibe what it is that you can emulate from my own way of responding to the situation at hand. When there is life, there is hope. There will be greater opportunities ahead,” Ambode said.

Speaking with newsmen, Akintola said his grouse against Governor Abiola Ajimobi remained bottled up, but promised to air his anger in a compendium of political happenings in due time.

The former governorship aspirant said the APC would only be peaceful if it ensured that all members of the party got the justice they deserved.

He urged the NWC and other appropriate organs of the APC to take steps to address the party’s faulty reward system.

I receive over 500 WhatsApp, text messages daily since Tinubu picked me as running…