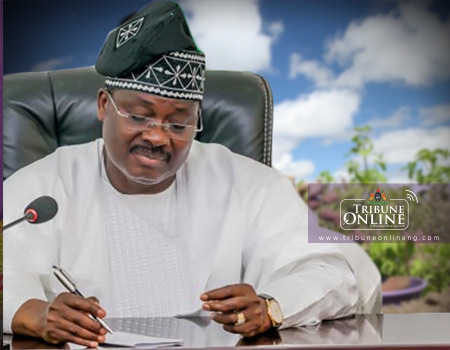 Governor Abiola Ajimobi of Oyo State will on Friday, December 28, present the 2019 appropriation bill before the state House of Assembly.

The farewell bill expected to be presented at plenary at about 1pm will define the policy directions, expenditure patterns, expected sources and stream of revenues to fund government projects and services for the coming year.

Upon inquiry by Nigerian Tribune that it was only six days to the end of the year, state Commissioner for Information, Culture and Tourism responded that the expected appropriate will be presented by Ajimobi on Friday.

“The governor presented it December 14th last year and he will present on Friday latest. It is a farewell budget,” Arulogun said.

At Friday’s presentation, all ears will be open to hear the performance and percentage of implementation of the approved 2018 budget of N271.7bn targeted to be largely Internal Generated Revenue (IGR) driven, as well as the extent of completion of ongoing road and infrastructure projects, the extent of completion of water supply schemes, the success of agriculture development schemes, the operation of the centralized harmonized demand notice by the state Board of Internal Revenue and performance of Ministries, Departments and Agencies.

Analysts will also be keen on knowing the functionality of the 2019 budget, to be presented in terms of the state’s debt to GDP ratio, per capita GDP, recurrent to capital expenditure, debt to deficit ratio, tax to GDP ratio.

In particular, various stakeholders and residents of the state will also be keen to know the allocations for payment of salaries and pensions, Infrastructure, Agriculture, Education and Health, Human capital development, security among others.

After the presentation, the appropriation bill is expected to immediately scale through the first reading.

We need your support for coming elections, REC tells NSCDC in Oyo

Police to investigate reported destruction of party billboards in Oyo