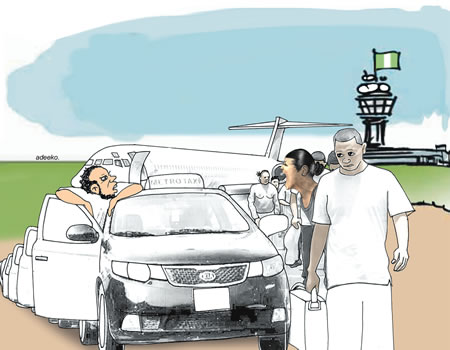 It may not be a common thing now, but kidnappers are now looking towards the nation’s airports to target people who may give them higher dividends in terms of ransom. SOLA ADEKOLA writes on this emerging trend, even as concerned authorities are making efforts to nip it in the bud.

BEFORE the September 11, 2001 terrorist attack on the United States, airports across the world used to be one of the safest abodes for international travellers in view of their sensitive nature and the special attention they received from governments across the world.

Since that terror attack, governments across the world, Nigeria inclusive, have upped the ante in terms of measures they put in place to prevent security breaches. Thus, there are now in place screening gadgets that scan passengers and luggage with precision leaving no details unexposed. The scanner employs low-level X-ray that sees through passengers’ clothes, permitting the imaging of the human body contours and surfaces giving a black-and-white image, minus the clothing. Other measures and policies have since been introduced.

Nigeria has also attained similar level of screening passengers as witnessed in the efforts of by Federal Airports Authority of Nigeria (FAAN) through assistance from countries like United Kingdom, United States, France and Germany in order to keep terrorists and other undesirable elements at bay. Unfortunately, the desired security for air passengers is currently being threatened despite the presence of security gadgets going by the latest activities of criminals at the airports.

While the country has been lucky not to have recorded any major act of terrorism at any of its international airports, sadly, there is a new wave of crime that is similarly dangerous, which is now giving airport users, particularly passengers a cause for worry. The new threat is kidnapping, which is already prevalent in parts of the country, is gradually finding its way into the nation’s airports.

At the MMIA, there was a case of a female passenger and her daughter who arrived from London, expecting to be picked up by somebody who apparently, they could not recognised physically. But for the alertness of the woman, she would have fallen into the waiting arms of some kidnappers who were on ground in the pretext that they were sent by her husband to come and pick her and her daughter.

Fortunately, the kidnappers could not achieve their goal, as they wrongly spelt the name of the woman’s daughter on the placard they displayed for easy identification. How the kidnappers got information about the woman and her daughter is hard to determine.

As the woman raised the alarm, denying recognition of the would-be kidnappers, the latter escaped before they could be apprehended. Authorities say the case is still being investigated.

Recently, another case of kidnapping was recorded at the Lagos airport where the picture of a white man in circulation showed how he survived an attempted murder at the hands of suspected Badoo cult members.

According to information doing the rounds, the white man on arrival at the MMIA, Lagos, was abducted after being picked up and driven to the house of the suspected kidnappers in Ikorodu area, where the man had his head bludgeoned.

Though the two cases are still under investigation, one thing is clear:  kidnapping is gradually creeping into the airports and passengers and authorities need to act fast.

Different reasons have been attributed to why kidnappers now target international airports for their crimes. But experts who spoke with Sunday Tribune claimed that the kidnappers would naturally have seen the airport, especially the international wings, as a place to find rich people with foreign currencies. While they saw the trend as dangerous, they attributed it to what they call ‘insider threats’ where airport staff with information about flights and passengers collude with kidnappers.

The other reason the experts pointed out is the lax security in most of the nation’s airports. Many key players across the sector have faulted what they called ‘porosity’ of the airports as seen in the number of unlimited and unrestricted entry points to the MMIA, Lagos, in particular.

According to stakeholders, with all the unrestricted entry points, the airport daily witnesses all manner of questionable guests, including car hire operators whose identities cannot be ascertained. Stakeholders in the airports transport operations at the airport say that on a daily basis, there are different manner of commercial transport vehicles, including the popular Kabukabu operating into and out of the airport in search of potential customers or  victims as the case may be. They stated further that even the authentic car-hire operators registered by the FAAN had, on many occasions, raised the alarm over the imminent consequences of allowing the unregistered taxi operators at the airport. But no action was taken by the authorities.

According to information gathered, for any kidnapper to operate successfully at the airport, there must have been an exchange of information between the kidnapper and an insider at the airport on the details of their potential victim. After obtaining the needed information, all the kidnapper needs is to come with his placard displaying the names of the passengers, particularly the in-bound international passengers. For such passengers, lack of vigilance or alertness may be their undoing.

Besides this ploy, some of the kidnappers intentionally drive their cars to the airport, mingle with genuine registered car operators and lure their would-be passengers with ridiculously lower fare in their desperate bid to achieve their goal. Passengers who are fond of looking for cheaper services often fall into the trap.

For retired Group Captain John Ojikutu, a one-time military commandant at the Lagos airport and who is currently the Managing Director of a security outfit, the threat of kidnapping and other forms of threat to security of passengers call for urgent review of the national aviation security programme.

According to him, the Lagos airport in particular is located within urban, developed, private houses.

“The airport service road has been turned to public and transit road. This allows all forms of infringement on airport operations and management as well as infringement on passengers’ privacies by those who do not have any business at the airport,

“Secondly, there are no records of accurate number of identity of all the car hire drivers in the airport, just as there is no accurate number of staff of all private operators at the airport. Above all, not all airport staffers wear identifiable on duty card (ODC), especially those working outside the airport security-controlled areas,” he explained.

For the registered car operators at the international airport, the problem boils down to activities of the kidnappers who receive information from families and friends of passengers.

Many of the operators have argued that it is only the family members or friends of travellers who know about their scheduled movement that can disclose it to kidnappers.

According to some of them, the case involving the woman and her daughter earlier mentioned should be traced to their family members or friends who must have been aware of their coming and had provide their details to the kidnappers.

The immediate past chairman of Car Hire Operators at the international wing of MMIA, Mr Afolabi Soile, said none of his members has ever been involved in such criminal acts.

He, however, agreed that it was difficult to identify who is who when it comes to car hire operations at the airport because even passengers coming into the airport at times hire public taxis like Uber or kabukabu to bring them.

He blamed passengers for endangering their lives by preferring to patronise car operators with ulterior motives who are not registered with the car hire operators at the airport.

“Even when we draw their attention to the danger in patronising unregistered car operators, they refuse to patronise us on the excuse that our charges are too high for them. They are not security-conscious at all. FAAN should tell them to patronise only the registered car hire operators,” Soile advised.

Following reports of the dangerous trend, the FAAN has ordered that security be beefed up around the airports even as investigation has commenced into the kidnap cases.

The FAAN General Manager, Corporate Communications, Mrs. Henrietta Yakubu, said though the issue of kidnapping could not be ascertained, she, however, added that investigation was ongoing to ascertain the veracity of the incident.

Yakubu who said the authority was not leaving any stone unturned to ensure that nobody was caught napping, added that security has been beefed up.

According to her, there should be no problem if passengers will take to the FAAN advice that passengers should only patronise the registered transport operators at the airport whose membership records are with the authorities.

A majority of airport users who spoke with Sunday Tribune are of the opinion that the relevant aviation authorities need to urgently review their security network.

According to Ojikutu; “the solution, to me, lies in doing something about the peculiar location of our airports and their immediate environment. We cannot afford the luxury of dignifying our airports as a public area for all comers. There is the need to develop a system of identifying all staff and differentiate those working in the security controlled areas.”

Other stakeholders who spoke with Sunday Tribune called on the airport authorities to ensure that all airport car hires are identifiable by colour and numbers, with all car hires drivers registered with identity cards and numbers.

They also advised that all airport/aviation operators at the airports must report the sack of any staff to FAAN and must withdraw all airport identity items with the affected staff while passengers should give names of those coming to see or receive them to the airlines, which in turn can get access pass for them at a fee.

Stakeholders also generally agreed that there is the need for FAAN to come up with additional policy that will make it impossible for any car operator not registered with it to operate at the airport, while any passenger willing to patronise unregistered taxis should step out of the airport before doing so.

Above all, experts also asked the aviation authorities to be more vigilant and harder on any unregistered operator found around the airport, while passengers should be advised on the danger inherent in patronising unregistered car operators.

2019: North ’ll decide on Atiku, Lamido, others when they present their programme —Yakassai

Insecurity: Do children have future in Nigeria?