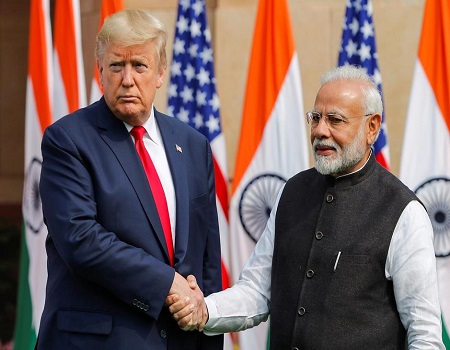 US President Donald Trump said on Tuesday that India will buy $3 billion worth of military equipment, including attack helicopters, as the two countries deepen defence and commercial ties in an attempt to balance the weight of China in the region.

India and the United States were also making progress on a big trade deal, Trump said. Negotiators from the two sides have wrangled for months to narrow differences on farm goods, medical devices, digital trade and new tariffs.

Trump was accorded a massive reception in Indian Prime Minister Narendra Modi’s home state on Monday, with more than 100,000 people filling into a cricket stadium for a “Namaste Trump” rally.

On Tuesday, Trump sat down for one-on-one talks with Modi followed by delegation-level meetings to try and move forward on issues that have divided them, mainly the festering trade dispute.

After those meetings, Trump said his visit had been productive with the conclusion of deals to buy helicopters for the Indian military. India is buying 24 SeaHawk helicopters from Lockheed Martin equipped with Hellfire missiles worth $2.6 billion and also plans a follow-on order for six Apache helicopters.

India is modernizing its military to narrow the gap with China and has increasingly turned to the United States over traditional supplier, Russia.

Trump said the two countries were also making progress on a trade deal, which had been an area of growing friction between them.

“Our teams have made tremendous progress on a comprehensive trade agreement and I’m optimistic we can reach a deal that will be of great importance to both countries,” said Trump in remarks made alongside Modi.

The two countries had initially planned to produce a “mini deal”, but that proved elusive.

Instead, both sides are now aiming for a bigger package, including possibly a free trade agreement.

Trump said he also discussed with Modi, whom he called his “dear friend”, the importance of a secure 5G telecoms network in India, ahead of a planned airwaves auction by the country.

The United States has banned Huawei, arguing the use of its kit creates the potential for espionage by China – a claim denied by Huawei and Beijing – but India, where telecoms companies have long used network gear from the Chinese firm, is yet to make a call.

Trump described Monday’s rally in Ahmedabad and again praised Modi and spoke of the size of the crowd, claiming there were “thousands of people outside trying to get in..

“I would even imagine they were there more for you than for me, I would hope so,” he told Modi. “The people love you…every time I mentioned your name, they would cheer.”

In New Delhi, Trump was given a formal state welcome on Tuesday at the red sandstone presidential palace with a 21-cannon gun salute and a red-coated honour guard on horseback on a smoggy day.

Nigeria must restructure to move forward ― Sanwo-Olu, Olabode George, others

VJ Adams, Lyta, others shut down Ilorin with ‘The Connect Party’