Adamu Ciroma in his own words 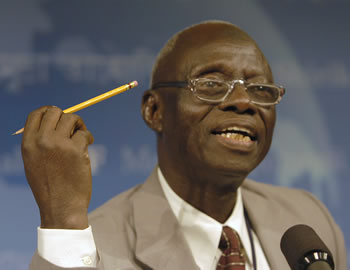 IN October 1977, my friend Mallam Mohammed Haruna then of the NEW NIGERIA introduced me to MallamAdamuCiroma (1934-2018) at the premises of the parliament building in Lagos where the session of the Constituent Assembly was held. MallamHaruna a powerful writer is now a Commissioner at INEC whose weekly column is on recess now because of his present assignment at INEC. Although it was a brief introduction on that day but it was the beginning of my friendship with Mallam Adamu Ciroma. I was told later that he was one of the contributors of the weekly column in The new nigeria newspaper titled Candido- The man behind the mask. Other contributors to that column I am told were AlhajiTuri Mohammed (1/1/1940-17/9/2010) who represented Gbako constituency of Niger state in the constituent Assembly of 1977 and Mallam Mamman Daura, who was a member of the sub-committee of public services including the Armed Forces and the police in the constitutional Drafting Committee of 1976. In the senatorial race in Niger state 35years ago in 1983, Alhaji Turi  Mohammed, who was from Bida lost to Professor Jerry Gana.AlhajiMammanDaura who is an uncle of President MuhammaduBuhari, served in the subcommittee on public service including the Armed Forces and the Police along with Dr. Obi Wali (chairman), Alhaji Ahmed Talib, Colonel M. Pedro Martins, Chief Ekanem Ita, Mr. Mamman Ali Makele and Dr. Tajudeen Olawale Idris.

The three of them worked in the New Nigeria Newspaper and the column was too powerful to be ignored during the tenure of General Yakubu Gowon. Another journalist who worked in the New Nigeria newspaper then and who represented Katsina-Ala constituency of Benue state in the constituent assembly was Mr. N. Mvendaga Jibo who was also my friend. I later covered MallamAdamuCiroma when he served as the Secretary of the NPN between 1978-1979 and when he became Minster under President ShehuShagari between 1979 and 1983. In 1999 when he became a Minister, I used to see him during the Federal executive council meetings at the villa when I served in the office of the Secretary to the Government of the Federation. He had a special way of calling my name. I missed him when he had a car crash in early 2000 on his way to Kano and was flown out for medical attention. On his arrival in the country in 2001, he personally phoned me. And since then till late last year, we were always in touch. Mallam Adamu Ciroma was a great man and to me he was a true friend. He had no pretense on anything. He was frank and down to earth. I will always remember him. On November 3 1977, he made a contribution at the Constituent Assembly. I hereby present the speech in full.

“My name is Adamu Ciroma and I represent Fika-Fune in Borno state. Well, I am contributing. I would like, as most speakers have done, to pay compliments to the CDC and its chairman for a job well done. It is becoming rather monotonous but I think that we can bear with this monotony in view of the excellent job which they have done. Our job here I believe is to try to make a good job even better. Before I go into the points which I wish to raise, I would like to make some preliminary observations. This country, I think one would say, has definitely established itself as a united country in terms of physical unification, the definition of its boundaries, et cetera. This has clearly been confirmed by the events which have brought us here today. What has been going on before the definite unification, is a long- term and sometimes imperceptible process and that is the process of integration. I think we should regard our exercise here in terms of facilitating and encouraging this process of national integration. To do this is to attempt to achieve peace, stability and progress. I think that everyone agrees that a Constitution is a code of rules of do’s and dont’s that create the atmosphere for facilitating the achievement of peace, stability and progress.

One other point I would like to make is that we should regard ourselves as being in a school and that this Assembly is part of our own arena for acquiring education. I think that if we are able to listen to what we are saying to each other, we should be able to arrive at a consensus. I think that consensus is so important. One can deal with issues in terms of votes and majorities but if you are dealing with people in a plural society, it is much better to deal with issues on the basis of consensus. Most Members have already taken oath to do their best and endeavour to produce a Constitution for this country. I would like to say quite categorically that God may never allow me to be involved in an exercise which deprives even one person in this country his legitimate rights. Members should be very careful that whatever they do, they should seek the interest of the minutest number of people, and should be done in conformity with the acceptable tenets refer to furthering political processes.

Some of the problems of this country are based on several pluralities-religions, ethnic and territorial ambition. I have noticed all the time the desire of many people to wash away these pluralities. These are Nigerian pluralities and in fact these are the causes of stress in this nation. I would like us to adopt a more positive attitude towards these pluralities and use all those parts of them that contribute to strengthening this nation instead of wailing and writhing about the fact of ethnic and religious pluralities. We can contain all these provided we work on the basis of consensus and on the basis of protective interests and rights. Now, Mr. Chairman, may I now touch on the question of Fundamental Objectives and Directive Principles. It seems that the only issue in this regard is whether these are justiciable or not justiciable. Some people are arguing that unless these pious hopes are made justiciable, they ought not to be in the Constitution. It is even suggested that if they are there, they should be in the preamble. There is nothing new in putting Directive Principles and Fundamental Objectives in the Constitution. Those Members who have read the papers that have been circulated will know the number of countries which have these principles in their Constitutions and they are not justiciable.

The important point, whether these come as preamble or whether they come as part of the Constitution in the way they are in the Draft, it is absolutely necessary that the goals and objectives of this nation should be clearly stated for the guidance of those who are called upon to govern us. We cannot take these things for granted. It is important that they become an accepted burden instead of being items for political manifestoes subject to discussion and being set aside when the election has been won. So, I am in complete support. I think that the fear of introducing new things, should not be allowed to dominate us. We should be prepared to innovate. I think that this is one of the innovations in this Draft and I commend it to this House. I will, at the appropriate stage, support the inclusion of this part of the draft in the Constitution.

Dangers of food and water in plastics

Of challenges, perseverance and basis for workable relationship

The state as protector of the citizen