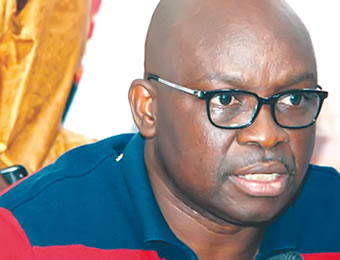 Governor Ayodele Fayose of Ekiti State will know today if his personal accounts frozen by the Economic and Financial Crimes Commission (EFCC) would be de-frozen as the matter comes up in court.

Justice Taiwo Taiwo had ruled on June 28 that the EFCC and Zenith Bank must appear in court to tell it why it should not grant a relief sought by Governor Fayose through his lawyer, Chief Mike Ozekhome.

He has put the ruling in abeyance, saying the respondents should be in court to state why he shouldn’t grant the motion praying the court to lift the suspension on the account.

Justice Taiwo had said: “I hereby order the first and second respondents to appear before this honourable court on July 4, 2016 and show cause why the order should be refused. This is not a refusal of the order, I have not refused it. But I only put it in abeyance which I said without prejudice to what will be the position of the respondents.”

Meanwhile, Chief Ozekhome  has lambasted Mr Femi Falana for his reported “no absolute immunity” stand. “Falana was wrong on his position that the Nigerian constitution cannot guarantee absolute immunity against criminal prosecution for governors, deputy-governors, president and vice-president in the country,” he said.

Chief Ozekhome said, in an interview on Sunday, that  “Femi Falana made three points on the matter and I totally disagree with him. He said that you can institute a legal process against governors, because they are also sued during election petitions. And I disagree with him on that because election petitions are too generic, they are generic because they are in a class of their own.

“They are hybrid, neither civil or criminal procedures. That is why it is the constitution itself that gives the right for a governor to be sued when they are challenging his mandate, it is not the lower laws like an act of parliament like EFCC.

Arguing further, Ozekhome said:  “It is the same constitution in section 308 that says that when it comes to civil or criminal procedure, you can never sue the governor and such should not be entertained in any court of Law.

“Contrary to Falana’s argurment, that immunity is not absolute, it is totally absolute. In the case of the IGP versus Gani Fawehinmi which he cited, the Supreme court upholds that the governor can be investigated, it, however, said you would have to wait till he vacates his office before you move any court process against him. That is the decision of that court.”

Falana had, during a paper entitled: “The Limits of Immunity Clause,” he delivered at the 60th birthday of the Secretary to the Edo State Government, Professor Julius Inhonvbere, said  the Money Laundering Act and Economic and Financial Crimes Commission (EFCC) Act, as well as the international criminal court laws, did not give absolute immunity to Governor Fayose against criminal prosecution, adding that the EFCC was toeing a legitimate path by freezing the governor’s accounts and, thereafter, obtain an court order against his bank.

Ozekhome said Falana goofed on these areas, saying “the third point by Falana that immunity is not total has been debunked, because Section 308 of the constitution overrides all the acts of parliament such as the Money Laundering and EFCC Act.”

El-Zakzaky to face trial, as court dismisses no case submission

Evans case against IGP, others must go on