744,000 jobs: Buhari to write NASS to stay away from implementation

• I have fresh instructions from Mr. President to proceed ― Keyamo 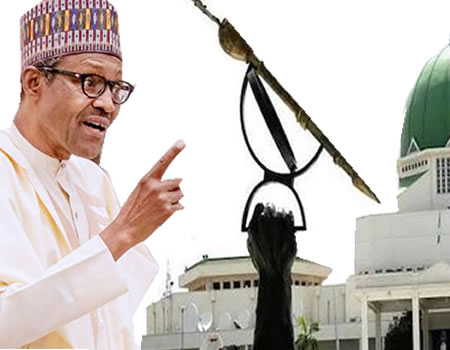 Against the directive of the National Assembly, President Muhammadu Buhari has directed the Minister of Labour and Employment, Festus Keyamo, to continue with the implementation of the Federal Government Special Public Works Programme (SPWP), under which 774,000 itinerant, unskilled workers are to be employed in the first phase, for three months to engage in public works.

Specifically, President Buhari was said to have resolved to write the National Assembly to stay away from the implementation of the programme, being a programme under the supervision of the executive which the Ministry of Labour is to be exclusively implemented through its agency.

An aide of the Minister, Davidson Olua, first confirmed to Tribune Online that President Buhari had given 100 per cent backing to the minister to go ahead with the responsibility given to him to ensure proper execution and implementation of the Special Public Works Programme.

The National Assembly had earlier directed that the SPWP should be suspended after a serious altercation between the Minister and the Joint Committee on Labour of the House of Representatives and Senate, over what Keyamo described as an attempt to hijack the programme by the legislature and powerful politicians.

Earlier efforts to speak with the minister was unsuccessful, but Mr Davidson, his Special Assistant said: “Yes! That is 100 percent correct. …but it is correct that President Buhari has given him the go-ahead, 100 per cent to proceed and continue doing his work regarding the Special Public Works Programme.

He confirmed that President Buhari had given him a renewed approval to proceed with the 774,000 job recruitment exercise.

He added: “It is correct, he has approved it and that we can go on with it. Moreover, he is also writing the National Assembly to stay away from it.”

However, in a telephone chat, the Minister of State for Labour and Employment, Festus Keyamo personally confirmed that he has secured a fresh instruction from President Buhari on the issue.

Keyamo stated that he now has the fresh instruction of Mr President to proceed with the recruitment exercise, adding that the instructions are undiluted.

Tribune Online reports that before the National Assembly issue came to the fore, Keyamo had declared that he would not be blackmailed into allowing the political class and society elites hijack the programme, warning those who have put pressures on him that only President Buhari can stop him.

President Buhari has approved the SPWP which is aimed principally at recruiting 1,000 itinerant, unskilled workers each in all the 774 local government areas in the country; making up of a total 774, 000 workers.

However, while inaugurating the states’ selection committee, Keyamo, who is the minister-in-charge of the programme said he has been under severe pressure and is being inundated with calls by politicians and some powerful individuals seeking to control how the workers are recruited.

The minister pointed out that there have been attempts to blackmail him by this set of people but declared that he would not yield to political leaders and their attempted blackmails.

Keyamo emphasized that except President Buhari, who appointed him stopped him, there is no other political leader that can stop him, adding, “I am answerable only to Mr President.”

He said: “In the past, it used to be that certain persons entrusted with this kind of programmes, they will hand it over to the political leaders. There has been an attempt at blackmailing this programme too to make us yield it to political leaders and we have said no. Not while I’m here.

“I have the pedigree and background, I know where I’m coming from before I came into public office. I have a pedigree and what I stand for and as I said in a previous press conference and I’m saying it again, that except Mr. President who appointed me and gave me the opportunity to drive this programme stops me, no other political leader or person can stop me. I’m only answerable to Mr. President.

The minister, therefore, warned the states chairmen not to yield to blackmail but stand their ground, adding that they should not accept to hold meetings in the house of political leaders and at the government houses, but only in their offices located at the National Directorate of Employment (NDE) office in each state.

He pointed out that between 10 per cent to 15 per cent has been set aside to be allocated to political leaders and political office holders in each local government area, because they are also Nigerians and part of the system, while there are many vulnerable among their followers as well.

Keyamo said the state’s selection committees are to identify and recruit those to be engaged under the programme, and be saddled with the responsibility of identifying the public works to be executed in each of the local government areas in all the states.

This, according to the minister would be in addition to projects already identified by several Federal Ministries, Agencies and parastatals in different localities across the country.

He pointed out that the ministry has ensured that the composition of the committee is multi-sectoral and local enough to balance all the competing interests in the different states.

The minister told the committee members that their selection was a result of a painstaking process carried out to ensure that the exercise is made as credible as possible.

The workers would be paid a total of N60,000 each for the three months, amounting to N20,000 per month. He said: “They would be engaged in roads rehabilitation and social housing construction, urban and rural sanitation health extension and other critical services.

“Depending on how successful the programme is or how buoyant the Federal Government’s purse is, this programme may either be extended or repeated every year. There are also various suggestions on some exit strategies for this programme, one of which is to move these workers to some agricultural projects, but nothing is concrete yet.”