50 pounds note with codebreaker, Turing, goes into use in Britain 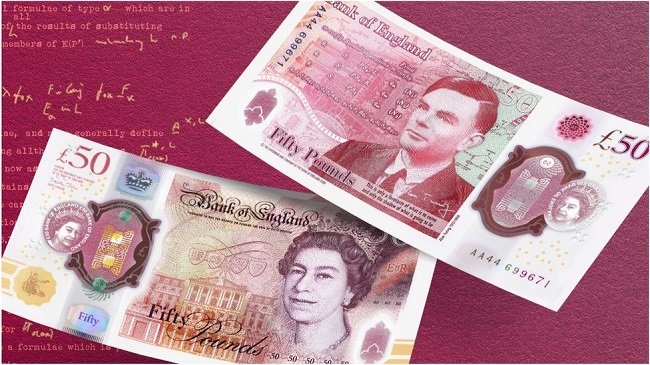 The new polymer Bank of England note would become available in bank branches and at cash machines in the coming days and weeks.

Celebrating Turing’s life, the Bank of England was also flying the Progress Pride flag above its building in London’s Threadneedle Street on Wednesday.

Often considered to be the father of computer science, Turing played a pivotal role in breaking the Enigma code.

His legacy has had a lasting impact on the way we live today.

Cracking the Enigma code is said to have helped to shorten World War II by at least two years saving millions of lives.

The Enigma enciphering machine, adopted by the German armed forces to send messages securely, was believed to be unbreakable.

Turing was part of an Enigma research section working at Bletchley Park in Buckinghamshire. The first wartime Enigma messages were cracked in January 1940 and Enigma traffic continued to be broken routinely for the remainder of the war.

Speaking at Bletchley Park, Bank of England Gov. Andrew Bailey said: “our banknotes celebrate some of our country’s most important historical figures.

“That’s why I am delighted that Alan Turing features on the new polymer 50-pound note.

Having undertaken remarkable code breaking work here at Bletchley Park during World War II, he went on to pioneer work on early computers, as well as making some groundbreaking discoveries in the field of developmental biology.

“He was also gay and was treated appallingly as a result. Placing him on this new banknote is a recognition of his contributions to our society, and a celebration of his remarkable life.’’

Born on June 23, 1912, Turing studied mathematics at King’s College, University of Cambridge, gaining a first-class honours degree in 1934. He was elected a fellow of the College.

In 1936, his work “On Computable Numbers’’ is seen as giving birth to the idea of how computers could operate.

His Turing Test also examined the behaviour necessary for a machine to be considered intelligent, the foundation for artificial intelligence.

The wartime hero’s later life was overshadowed by a conviction for homosexual activity, which has since come to be considered unjust and discriminatory.

Turing was convicted of gross indecency for his relationship with a man. His conviction led to the removal of his security clearance and meant he was no longer able to work for Government Communications Headquarters (GCHQ).

He was chemically castrated following his conviction in 1952 and died in 1954 at the age of 41.

He was later given a posthumous royal pardon.

The new polymer 50-pound note contains advanced security features, completing what the Bank described as its most secure set of banknotes yet.

The note would join the Sir Winston Churchill five-pound note, the Jane Austen 10-pound note and the JMW Turner 20-pound note, meaning all Bank of England banknotes are now available in polymer.

After that, the paper notes would no longer be legal tender, so people should spend them or deposit them at their bank beforehand.

The Bank of England’s chief cashier, Sarah John, said: “the polymer 50-pound note is the most secure Bank of England banknote yet, and the features of the note make it very difficult to counterfeit.

“All of our polymer banknotes can be checked by looking for two key security features: a hologram which changes image; and see-through windows. So, if you can check one denomination of banknote, you can check them all.

“The new 50-pound notes, like the polymer 10-pound and 20-pound notes, contained a tactile feature to help vision impaired people identify the denomination.’’

The Bank of England Museum has also launched an online exhibition to coincide with the Turing 50-pound banknote entering circulation.

Cash use has fallen sharply during the coronavirus pandemic, with several stores discouraging customers from using this payment method.

The number of cash payments made last year plunged by 35 per cent, according to recent figures released by trade association UK Finance.

Coins and banknotes were used for 17 per cent of all payments in Britain last year, while 27 per cent of payments were contactless, UK Finance’s figures showed.

Senate to MDAs: Be prepared to account for public funds