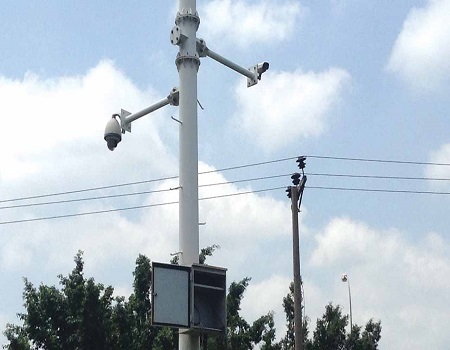 A coalition of Civil Society Organisations operating in Nigeria on Wednesday staged a peaceful protest to Economic and Financial Crimes Commission (EFCC), with the view to immediately launch an investigation into the failed $470 million Closed Circuit Television (CCTV) project.

Members of the coalition had in the petition dated 11th December 2019 and addressed to EFCC Chairman, Mr Ibrahim Magu, urged the Commission to unveil those involved in the financial scandal with the view to prosecute them and recover the fund.

Speaking recently before the House of Representatives’ Committee on Finance, Nigeria’s Minister of Finance, Mrs Zainab Ahmed confirmed that Federal Government has started repayment of the Chinese loan.

Worried by the development, the coalition in the petition observed that the $470 million CCTV scandal depicts the level of brazen abuse of authority where public officials entrusted with key offices, responsibilities and resources, wantonly abuse this trust to the end.

The petition reads: “Social Action, Nigeria and its partners, Civil Rights Council (CRC), the Citizens Budget Platform and the Anti-Corruption Network are civic organizations that work to promote social justice in solidarity with other active citizens’ groups and communities. We work in the areas of Economic Justice, Trade and Debts, Public Finance Accountability, Human Rights and Good Governance.

“We write to request your attention and action on a $460 million loan acquired for Closed Circuit Television, CCTV camera project in the Federal Capital Territory, F.C.T, Abuja.

“Sir, the loan was acquired in 2010 by a contract (MoU) that was signed (on behalf of Nigeria) by the then Minister of Finance, Olusegun Aganga. It was awarded to a Chinese firm, ZTE Communications.

“Nine years into this supposed contract, none of the said CCTV Cameras can be cited by Nigerians anywhere in the FCT and neither was the huge amount of money borrowed for this purpose refunded to the national coffers.

“On the contrary Sir, the country has continued to repay this loan yearly and consistently with the peoples’ resources while not having enjoyed the services or benefits of this project (CCTV Cameras) for a single day.

“It will interest you to know that the Minister of Finance admitted before Nigerians in October 2019, during the 2020 budget defence before the House of Representatives Committee on Finance, that the project does not exist anywhere, whereas, she (her ministry) is only compelled to service the loan via budgetary provision annually.

“Sir, no doubt this is a glaring case of fraud and graft. Nigeria has been known to fare poorly with accounting for loans it acquired for diverse purposes and worse still judicious application of these.

“This malfeasance has gone unchallenged for decades in the country and no one has been brought to book for such act of fiat. This $460 million failed CCTV contract is yet another case and demonstration of brazen abuse of authority where public officials entrusted with key offices, responsibilities and resources, wantonly abuse this trust to the end that, ordinary Nigerians are not just denied the benefits of the safety and security these CCTV Cameras would have been providing, but are even further made to use the scarce resources that would have gone into development, service a non-existing project cum loan. This indeed you would agree with us sir is not only double jeopardy but a travesty of justice.

“We, therefore, appeal to you, sir, to use your strategic office as the chief of the EFCC, the nation’s anti-graft body, to without delay, launch an investigation into this CCTV project with a view to: ‘Unravelling the circumstances around it; identifying all the actors behind it.; determining the role(s) they played in the failure of the loan; recovering the loan from them and bringing them to book through rigorous and effective prosecution before the court of law.

“While earnestly looking forward to your prompt action on this, to set a precedence landmark and serve as a deterrent to public officials who engage in loan tripping, do please have the assurances of our most respectful regards.”