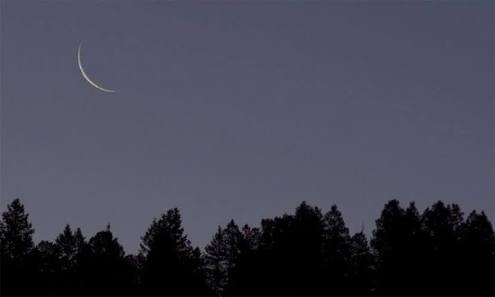 The Shawwal moon has been sighted in Pakistan, signaling the end of Muslim fasting period.

The Pakistani Chairman Ruet-e-Hilal Committee, Mufti Muneeb-ur-Rehman, who announced sighting of Shawwal moon in different parts of the country on Tuesday, according to ARY News, said Eid-el-Fitr will be observed in Pakistan on Wednesday.

Unofficial and unconfirmed testimonies of moon sighting had started pouring in from different parts of Pakistan right after Iftari, mostly from Punjab and Sindh, report said.

Before the announcement, Mufti Muneeb-ur-Rehman was chairing meeting of the central committee at Aiwan-e-Auqaf in Lahore.

The Pakistan Meteorological Department (PMD) had forecast that there were more chances for the sighting of Shawwal moon on Tuesday.

The met department had said weather in Karachi would be cloudy, hence it would be difficult to sight moon here. Molana Asad Deobandi had chaired meeting of zonal Hilal Committee in Karachi in coordination with SUPARCO, Pakistan Navy astronomers and met department.

Most of the countries including Saudi Arabia and other Middle Eastern countries and European countries would celebrate Eid on Wednesday, while the crescent could not be sighted in some countries like India and Bangladesh.

In their sermons during Eid congregations, Ulema and religious scholars would highlight the significance and philosophy of Eid-el-Fitr. Special prayers would be offered for security, progress and prosperity of the country.

Main Eid congregation would be held at Faisal Mosque in Islamabad. President Mamnoon Hussain is expected to offer his prayer there along with parliamentarians‚ envoys of Muslim countries and top government officials besides thousands of people.

Earlier, Mufti Munib got outraged over publicising of information of testimonies on media without confirming from Ruet-e-Hilal Committee.

“Everybody has become chairman. Media is misleading people. No testimony has been received from Lahore,” he had said.

The mufti had forced a representative of Auqaf to leave the conference room with his landline telephone through which the representative was receiving testimonies and informing media without consent of the central Ruet committee. Then Mufti Munib himself had left the room excusing to make confirmation regarding sighting of moon.

The ruckus had erupted when Munib-ur-Rehman came to address the media at 8:10 pm.

Later at around 9:30pm, Mufti Munib finally announced sighting of Eid moon after earlier denials and arguments with journalists.

How water hyacinth can be made economically viable —CEO, MitiMeth