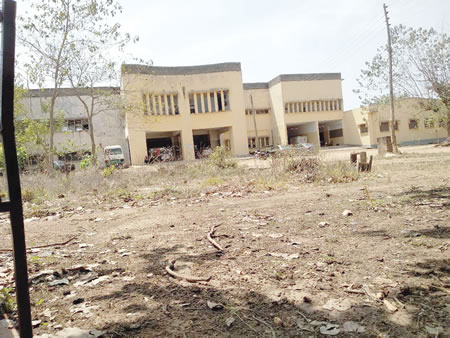 Though it is one of the oldest general hospitals in the South-West region, the Okeho General Hospital in Kajola Local Government Area, established to provide holistic health care that will be accessible and affordable to strengthen the health sector, is no longer living up to expectation. YEJIDE GBENGA-OGUNDARE reports that the massive structure not only looks like an abandoned building, the hospital is not performing at the expected standard and is beginning to look like an economic waste

The Okeho General Hospital in Kajola Local Government Area of Oyo State is one of the oldest in the state. It was designed to meet not only the primary but also the secondary health needs of people in Okeho town and environs. However, like most government hospitals across the country and despite the attention given to details in building a standard hospital, there seems to be a disconnection between the vision of those that built the hospital and its present day realities.

Okeho community is renowned to be a part of the history of the colonial and post-colonial Nigeria and prides itself on being a crucial part of the politics of Oyo State. The area initially known as Okeho/Iganna district council, created in 1955 with 36 wards in the defunct Western Region of Nigeria became Kajola local government in 1976, with headquarters at Okeho as a result of the Local Government reforms.

The local government has major towns including Ilero, Ilua, Ayetoro-oke, Isemi Ile, Iwere-oke, Ilaji-oke and other hamlets which the Okeho General hospital is expected to serve.

In 1987, the Oyo State Hospital Management Board was inaugurated with three zonal offices at Ibadan/Ibarapa, Oyo/Ogbomoso and Oyo North to manage 51 health outlets within the state and provide an all- encompassing health care that is accessible and affordable to restore transform and reposition the state’s health sector.

Few weeks after the board was inaugurated, the General Hospital, Okeho was inaugurated by the then Military Governor of Oyo State, Colonel Adetunji Idowu Olurin, on June, 11 1987, making the hospital  one of the pioneer general hospitals in the state while other health facilities within Oyo North were sited at Saki, Iseyin, Iwere, Iganna and Ado-Awaye.

A walk round the hospital, built on a large expanse of land at the entry of the town at a point that makes it accessible to other neighbouring communities because it is directly at the junction that opens up to other areas, revealed that the hospital is not at present what it was built to be. The structure seems not only under-utilised but is also an economic waste, rotting away with the buildings gradually degenerating and facilities falling into disuse.

Many residents complain that the hospital which is supposed to be a reference point for Primary Health Care Centre across the community is not better than the community health centres as it does  not provide affordable, accessible and high quality medical care expected of a general hospital.

Consequently, people in the community and environs are left with two options — consult a private hospital to access expensive health care within the locality or move to Ibadan, the state capital, to get the required service from the General Hospital or University Teaching Hospital. 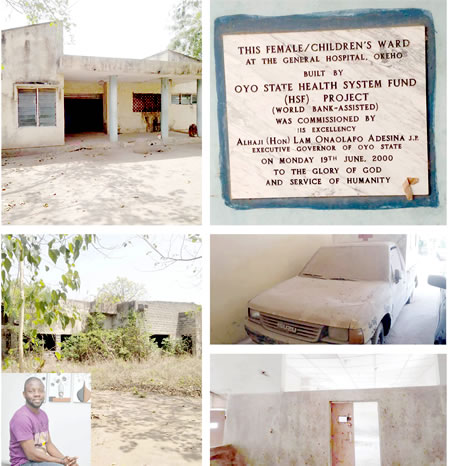 The condition of the Okeho General Hospital at present leaves a lot to be desired. The roofs of the two major storey buildings within the hospital (that is the administration and female/children’s wards) have been blown off. The building has lost all forms of conducive and hygienic condition expected of a healthcare facility. Anyone that attempts to climb the stairs to access the top floor of the building risks an attack from wasps that have become ‘landlords’; that is if such a person is not hit by the wings of flying bats that have also made the place their abode.

This makes it difficult to ascertain if there is anything of value on this floor of the building. Further assessment reveals that the morgue inaugurated in 2000 during the administration of Alhaji Lam Adesina is no longer functional and the building has been abandoned. The pharmacy is merely an office now as it cannot boast of having even the basic drugs, and patients have to procure their drugs from private pharmacies.

While the laboratory in the hospital is still functional, it is not certain that it can carry out basic diagnostic tests. Waste management is another challenge for the hospital; the waste disposal method is crude and unexpected in a clinic. Waste is emptied into a pit and burnt periodically, creating more health hazards for the people and workers.

Speaking with Nigerian Tribune on the condition of the hospital, Olutayo Irantiola, a public relations consultant and Okeho Indigene, stated that “if the hospital cannot be provided with a proper waste disposal system, it is at least not too much to build an incinerator for proper disposal rather than expose workers and the community to health hazards associated with burning of medical waste and the risks of exposure to bacterial infection that can emanate from the pit.”

Also, the hospital has no ambulance in operation after the only one the hospital had packed up and is yet to be repaired. Nigerian Tribune investigations revealed that the hospital had two ambulances before but the “other ambulance was abandoned in Ibadan because it was not fixed after developing fault.” This makes it virtually impossible for the hospital to transport patients necessary during emergencies.

Aside from the dilapidated buildings, there are a lot of uncompleted structures which makes it easy for hoodlums to hide and carry out their evil acts. Indeed, the hospital can be described as a large expanse of land filled with uncompleted and abandoned buildings.

And though the hospital is still serving the people, the service it is rendering has made it not to be the place to go when experiencing serious health challenges. An indigene told Nigerian Tribune that “though the hospital can still be said to be functional, it is underperforming. In the hierarchy of the provision of medical services, the Primary Health Care Centre should be the first point of contact before cases are transferred to the General Hospital, which is secondary, before it gets to the teaching hospital if required which is tertiary. The truth is our general hospital is operating possibly at the level of a primary health care centre.”

Aside from the morgue, the administration of former Governor Lam Adesina also inaugurated other projects such as the female/children’s ward in the year 2000 but 20 years after the inauguration, the facilities are virtually moribund. But residents of the area still laud the medical personnel for doing a good job in spite of their challenges.

“I would want to acknowledge the selfless service of the members of staff working in the less-than-conducive environment. It is only committed individuals that can give their best in this type of working environment, at this point in time, wherein professional are exiting the country for better working environment.

“It’s rather unfortunate that we are experiencing two forms of economic wastage with this abandoned facility: the hospital’s inability to generate employment and the abandoned structure that has not been profitable to either the government or the community. There is a need for successive governments to complete all projects regardless of party affiliations.

“We need to start with at least a very functional building, well equipped. We deserve more in Okeho. Our relevance should transcend every four years when the political class jostle for office. We need hospitals that are adequately equipped in Okeho and Oke-Ogun in general. There is no need rushing people to tertiary healthcare facilities in Ogbomoso or Ibadan before they can have quality medical care,” Irantiola said.

And while the residents of Okeho are putting up with the situation as best as they could, the desire for a health institution capable of giving access to required care right in their community at affordable prices remains unabated.

“We need the hospital to operate at its optimal level. It would provide a lot of jobs; it would also be a lifeguard for people in that region and people would no more die from every flimsy issue requiring medical attention.  The community is helpless, but we appreciate those who have their private practices in Okeho. They have helped to keep the town healthy,” a resident said.

They also attributed the poor condition of the clinic to lack of adequate attention from government over the years.

Irantiola said: “It is a fact that one of the things that the Okeho General Hospital lacks is maintenance by the Oyo State Hospital Management Board. Thirty three years is not a long time to have erected a massive structure that is now dilapidated. There are many private houses within town that are more than 50 years and they are still standing. I would also say that the hospital is also suffering from the syndrome of discontinuity of projects by successive governments.

“The hospital is not the only victim of uncompleted projects. I would also add that the the Okeho Dam which was developed under the Oyo North Agric Development Project (ONADEP) and constructed by the Oyo State Agric Development Project (OYSADEP), with a capacity of 0.818 m cm was conceived to meet the water needs of the eight communities in the Oke-Ogun district. However, the dam has been overtaken by bush. In 2015, the former governor of the state, Abiola Ajimobi, promised us a College of Health Science and Technology but it has not happened till date.

“There are a lot of great facilities needing government’s attention. As we all know, Okeho needs government’s presence more. Our importance should not be limited to only electioneering periods.  We will be glad if the administration of Governor Seyi Makinde rehabilitates the hospital, help to complete other uncompleted projects like the Okeho dam and also if the Ibadan Electricity Distribution Company can give us power supply.”