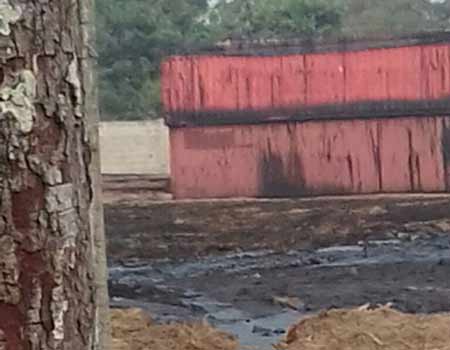 THIRTY years after Koko suffered the effects of toxic waste, another substance suspected to be injurious to human health has been found dumped in a part of the town.

While a Whitman masterminded the toxic waste offloaded in the town 30 years ago that caused a lot of uproar, the present one is by the instance of a Nigerian.

As of the time of filing this report, members of the community who are aware of the development are in a panic of a possible outbreak of epidemic in the ancient Itsekiri town.

Nigerian Tribune’s visit to the town on Saturday on a fact-finding mission revealed that many of residents of the area are oblivious of the dangerous development.

This reporter, who visited the town with some of his colleagues, gathered that the substance is a hazardous sludge ferried from one of the oil multinationals in the Niger Delta region and surreptitiously dumped in a site by a waste management company in the town.

The waste management company, Ebenco Global Link Ltd, is said to be owned by one Ebenezer and has been operating in the town for close to seven years.

Many indigenes of the town are said to be in the employment roll of the company, thereby reducing the number of jobless youths mopping the street.

The attention of Mr Ebenezer is said to have been called to the toxic sludge some of which are being allegedly buried at a yard belonging to the company.

Ebenezer was said to have claimed to his neighbours and challengers that the substance is harmless.

His claim was, however, said to be contrary to a laboratory test carried out by one of his neighbours which proved the sludge to be harmful when it comes in contact with borehole water. When Nigerian Tribune visited the premises of the company in the heart of Koko, the gateman, who initially said his boss was in the office, later came out to recant.

He insisted, in Hausa language, that his boss was away from the office, returning the filled visitor’s form.

Another worker of the company, Mr Michael Omere, also corroborated the absence of his boss, but no sooner he did that than Mr Ebenezer was seen driving out of the company in a convoy.

Nigerian Tribune could not access the site the alleged toxic waste has been dumped with some buried for fear of harassment.

An indigene of the town, which declined to identify him, affirmed that a toxic waste has been dumped in the town.

“We hear say them dump toxic waste, but e no concerns me. Nothing goes do me, and my family members I pity. For me, ago soon waka go abroad,” he noted in pidgin.

As of today, there is a conspiracy of silence as those whose voice could resonate on the matter are afraid of attacks from hoodlums and security agents.

Allegations are also rife that some community leaders, health and environmental officials of the local government headquarters and some security agents have been compromised to sweep the issue under the carpet.

Secretary of the community, whose name could not be ascertained, but was reached through his mobile line, angrily refused to respond to the toxic waste or the allegation of compromise.

Nigerian Tribune gathered on Monday that a Channels TV reporter was almost lynched on Saturday shortly after this reporter and his colleagues left the town.

“Later yesterday (Saturday), a Channels TV correspondent was threatened and chased out of Koko, all in a bid to sweep the issue under the carpet.

We state, unequivocally, that we will expose all the evil people behind the conscienceless dumping of the hazardous material in Koko.

We prefer to stay unanimous for fear of our lives.

Soldiers and hoodlums are already after us for raising objections to the hazardous/toxic materials,” a concerned Koko indigene disclosed.

Meanwhile, a serving councilor at the local government, Honourable Morrison Oritsegbemi said he was aware of the alleged toxic waste dump, but added that he hadn’t visited the site.

“I’m aware of the toxic waste dumped at Koko, but I haven’t visited the scene and I don’t want to comment on hearsay until I get to the place and see for myself maybe Tuesday,” he stated.