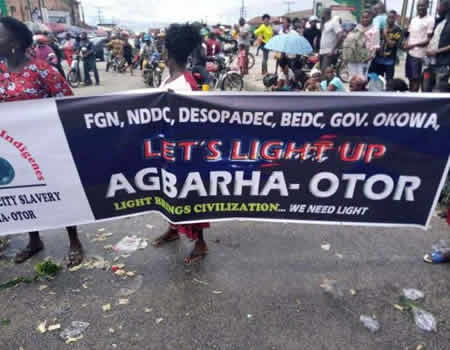 Agbarha-Otor community is the country-home of the Ibru dynasty which is host to the Michael and Cecilia Ibru University and the East West Road connects the oil-rich states of Edo, Delta, Bayelsa and Rivers in the South South.

The angry protesters, comprising women, children and youths armed with banners and twigs of trees, besieged the road chanting war songs and requesting the immediate restoration of electricity to Agbarha-Otor.

The protesters created raucous traffic gridlock on the expressway for over six hours, calling on the Delta State Governor, Senator Ifeanyi Okowa and the Local Government Chairman, Godwin Adode to immediately come to their aid.

Some of the banners brandished bore inscriptions such as “BEDC is a fraud,” “Give us light” and “We are tired of darkness,” among others.

The protesters, who spoke to journalists, alleged that BEDC management was demanding about N200 million from the community before power could be restored.

Some others lamented that their transformer was faulty and the management of BEDC claimed they would not fix the faulty step-down transformer until N70 million owed by the community is paid.

Men of the 222 Battalion, who monitored the protest to prevent it from being hijacked by hoodlums, faced herculean task pleading with the protesters to clear the road to enable travellers on transit to continue their journey.

The protesters, who defied the light rain that characterised the protest, insisted they must have an audience with their governor and local government chairman before they could evacuate from the scene.

Nigerian Tribune reports that the protesters lamented the grounding of several micro-businesses due to the over-three years blackout in the community, calling on Governor Okowa to intervene.

Meanwhile, a policewoman was reportedly injured as she allegedly attempted to teargas the protesters.