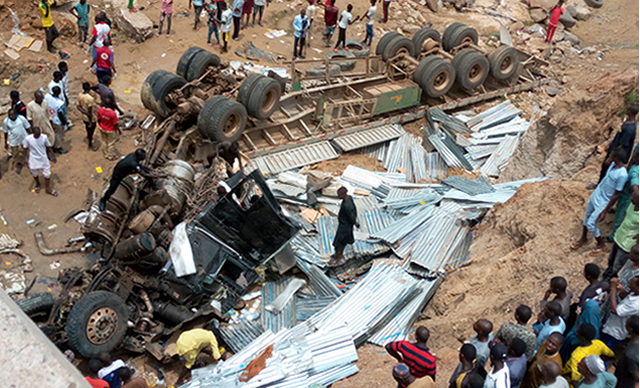 ABOUT three persons, including two women, were killed with and three others injured on Wednesday morning in an accident involving a Mack truck at the Urua Ekpa Junction area along the Calabar- Itu highway in Uyo, the Akwa Ibom State capital.

The incident, according to an eyewitness, Effiong Bassey, occurred at about 8:30 a.m when the truck, with a Rivers State registration number, BNY 137 XA, veered off the road in a bid to avoid crushing a tricycle in its path, which was trying to negotiate the junction.

That action made the truck lose control, thereby crashing into a nearby filling station where three bystanders who were waiting to board vehicles to their destinations were crushed to death.

Bassey, a motorcyclist, said apart from the three persons killed, three other people sustained serious injuries and were taken to hospital for treatment.

The Akwa Ibom State Sector Command of the Federal Road Safety Corps (FRSC), Mr Sunday Oghenekaro, while confirming the incident, however, said only a man and a woman were killed.

Oghenekaro blamed the accident on the tricycle operator who crossed the path of the truck.