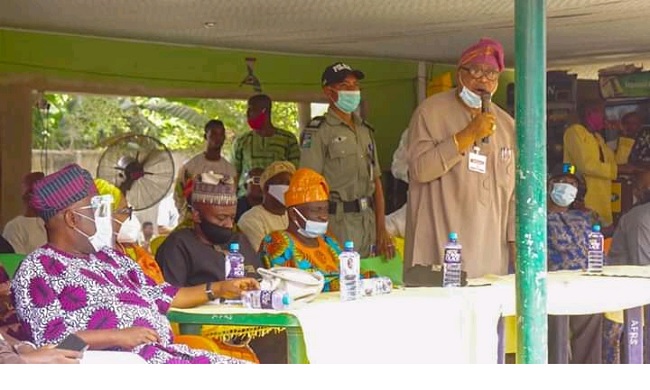 LEADERS and chieftains of the All Progressives Congress (APC) in Oyo State, on Wednesday, vowed to work with other stakeholders to dislodge the Peoples Democratic Party (PDP) from power in the next general election in 2023.

At a meeting of the Oyo Central Senatorial district of the APC held in Oyo and attended by notable politicians within the party across the state, speakers were unanimous in their call for unity and harmony among leaders and members of the party, particularly as the nationwide membership registration and revalidation exercise draws near.

In his address, a former governor of the state, Chief Adebayo Alao-Akala, expressed optimism about the APC recording victory in all elective posts across Oyo State and Nigeria in 2023, “provided all patriots and party faithful are ready to work together and do the needful to win the confidence of the electorate in all the nooks and crannies.”

Chief Alao-Akala said: “In Oyo State, only the APC can stop the APC from winning all future elections just like it played out in 2019. Now that we have put the past behind us, we must all rise up to take up the challenge and reclaim our dear state from charlatans who are in the saddle at the moment. It is obvious that the real politicians are in the APC while the few ones in PDP have been blocked from participating in governmental affairs.

“To this end, we must be able to put our house in order and also attract those gladiators in the PDP who have been humiliated by the man in power. It is not yet time for the internal struggle for party tickets as what is important now is how to build a strong and virile Oyo APC.”

The lawmaker representing Oyo Central in the National Assembly, Senator Teslim Folarin, commended party leaders and members for their steadfastness and loyalty in the previous months “even when it seemed the party would not survive the crisis confronting it immediately the 2019 gubernatorial poll was lost.”

According to him, “it is the dawn of a new era and we shall all work together to improve the fortune of our dear party. Right from this moment, I am assuring you that Oyo APC will continue to wax strong as many people are coming to join us.”

Speaking in the same vein, Senator AbdulFatai Buhari called for patience and unity among members of the party across the state.

“We the elected representatives are fully aware of the challenges being faced by most of you in terms of empowerment and we shall continue to work hard to bring succour as desire while we would not shy away from discharging our duty as lawmakers and party ambassadors,” he said.

In their remarks, the state caretaker chairman of the APC, Chief Akin Oke, and his deputy, Chief ‘Lekan Adeyemo, charged party faithful to mobilise existing and prospective members to participate in the forthcoming membership registration and revalidation exercise which, according to them, would be a pointer to the fact that the APC remained the party to beat in the state in the 2023 general election.